Living on an island as I do, I am used to setting out early to get somewhere - one has to make allowances for boats, trains, coach loads of old dears getting in the way. I left three hours to get to Chichester- which is only probably an hour away. I thought I would have time for a little light lunch, enjoying some balmy weather, a coffee before the play begins.

Of course I didn’t allow for the joy of English travel. It was raining for starters and what should have been a short journey became a Herculean outing of endurance. Trains started. They stopped. They started again. Taxis were flagged down, money leaching away; insidious rain seeped into my clothes, my umbrella wielded with murderous mutterings about rail executives. 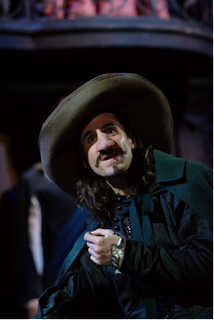 After several long hours in which I was sure I would miss the play I ran into the theatre with two minutes to spare. Relief was palpable.

I had been to Chichester a few times before but only ever in the little Minerva Theatre; so stumbling headlong into the much larger Festival Theatre and staring about like a wild eyed loon looking for my seat there were a few rows of startled old ladies clearly wondering where I had blown in from. To be fair I got their point; soggy, battered by the hurricanoes of Hampshire and the fickle wheel of Fortune’s railway I probably looked a little crazed. More so than normal anyway.

Stumbling into my seat I flounced down, shoving my damp attire under my seat and shivering slightly from the cold. Would all this effort be worth it? Would Joseph Fiennes impress as the poetical musketeer, ambushed by love seizing his ‘unwary heart’? The expedition was well worth it.

From the opening dazzle of the Parisian theatre to the closing melancholy autumn tones of the convent orchard this was an enchanting production; a Romance in the proper sense. Humorous and heart-rending in equal measure the play sparkled. 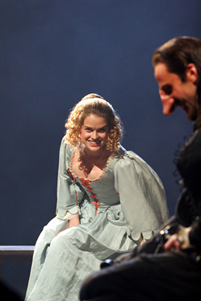 o really rises or falls on Cyrano, and Joseph Fiennes was truly impressive. Used as I am to seeing him on screen really only needing to look good and swoon about a bit, I was impressed by his performance. Little moments underscored the sweeping grandeur of the production. When Roxanne blunders into telling Cyrano about her love of another man, his crushing disappointment was conveyed in the simple word ‘Ah’; and later in the same scene as Roxanne blathers on about her adoration and Cyrano’s ‘courage’ in defeating 100 soldiers (no one said it was a play marked by realism) he quietly replies in a voice brim full of brave faced heart break ‘I’ve done better than that since’.

Not that it was all serious stuff. There was lot of humour in this production. Cyrano’s relationship with his best friend Le Bret was marked by a mutual and droll understanding. The pastry cook Ragueneau with his misplaced belief in his own artistry was a delight; there was no feeling of savagery in the laughter. It was a gentle humour. The production encouraged a kind of affection for the characters. 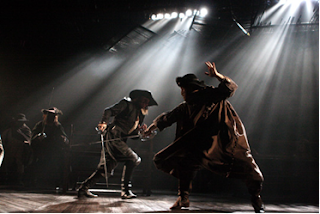 Cyrano is the classic soldier scholar and Fiennes convinced both as the poet and the combatant; the fight scenes were exciting and believable- even fighting the hundred men. Ok so maybe I was suspending my disbelief just that bit far but the production had elements of fairytale glamour which enabled the audience to believe the far fetched plot moments.

The production was fortunate to have strong performances from the whole ensemble; each part added to the atmosphere of the play, from the bawdy smoky theatre to the greedy cut priced literati in the pastry shop. Not forgetting Alice Eve as Roxanne. Now sometimes Roxanne can become a little frustrating; why does she not see? How is it she does not understand about Cyrano? It always makes me want to shout out at the stage. In this production though we felt some sympathy for Roxanne. She was young and frivolous and in love with the idea of love rather than love itself, true, but her youthful exuberance made her more understandable. Stephen Hagan as Christian also put in a strong performance; happy to be ‘comely and dumb’ but in his own way a true and honest man. Just no poet.

Some versions of Cyrano are a little clunky or ridiculously flamboyant; however this production used a translation of Rostand by Antony Burgess. It made full use of the poetical turn of phrase and there were some delicious sections of language which were given full reign.
‘Ah, Paris, swimming through nocturnal mist,
The rooftops draped in azure, shyly kissed
By an uncertain moon- proscenium
All dressed and ready for the scene to come…’ 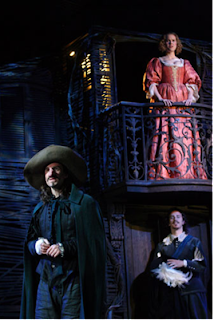 Most of the play was draped in rich colour; dark blues, warm oranges. The warmth of tone complemented the rich poetry, love and tragedy.

Needless to say when Cyrano finally got to recite his ‘goodbye’ letter as he raged against the dying light, I was glad I had packed my hanky.

This was a beautiful production, funny and tragic. Sad to say it was not touring after the run and disappeared into the ether shortly after I saw it. I think the production was summed up best by Cyrano’s final words, delivered amidst a tense and poignant quiet by Fiennes;
‘…A Diamond in the ash
Of the ultimate combustion-
My panache’.