Finding the Donmar Warehouse is a bit of an adventure in its own right. Tucked neatly between a Fred Perry shop and lots of little boutiques selling horribly priced Vivienne Westwood shoes and faux vintage house dresses, I wondered would the Donmar make me feel like a vagrant at the Ritz?

Some theatres and theatre crowds go for this; making the experience one for the elite. Despite the boutiques however the Donmar did not feel the least like an overly exclusive space. In fact it felt comfortably inclusive.

The Donmar Warehouse really is a ‘does what it says on the tin’ type place. A small box of a studio theatre, it has a front room feel of welcome and this adds to the sense of cohesion between audience and actor. I liked it.

But what of the play? Tickets had been booked for this Doll’s House ages and ages ago, and originally I had been tempted by wanting to see Gillian Anderson. As any good child of the nineties, I had first seen her in The X Files (which I still can not watch on my own) and then later in the BBC Bleak House in which she put on a splendid and surprising turn as the ennui ridden Lady Dedlock. So I thought to myself ‘why not see her on stage?’ 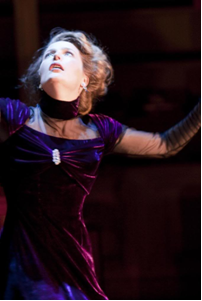 Some time after this the rest of the cast was announced and this only added to the excitement levels. Tara Fitzgerald (been in too many brilliant things to mention) Anton Lesser (saw him as an excellent Leontes a few years ago) Toby Stephens (To whom all recent theatre going activity started; bless ‘im!) and Chris Ecclestone (who I have thought brilliant since first seeing him on the telly when I was about 10; and who famously smiled at me along the South bank once- it is a story that is oft repeated) So with all those asides aside you can probably guess I was looking forward to it.

The production certainly did not disappoint. It was a new version of Ibsen by Zinnie Harris so a few things had been changed- the setting had changed from fin de siècle Oslo to Edwardian London. Torvald became Thomas; Nils became Neil and both became politicians rather than lawyers or bankers. Now thinking about it Ibsen’s play does not really need improving, but that being said I rather liked most of the changes. Perhaps it made it easier for me to identify with, and alongside the references to political integrity (a joke everyone in the audience got) the new version seemed strangely familiar. Some of the language had been a little updated and this to be honest sat a little uncomfortably with the whole Edwardian setting. The lines ‘have you forgotten that then your reputation will be in my hands?’ was transmuted into ‘I’d still have your husband by the testicles’. Hmmm.

Still mild reservations aside about the adaptation I could not fault the acting which was superb. Anderson was a fabulous Nora; childlike, pouty petulant and proud. Her frightened desperation at her crumbling world was clear and her innate understanding that her husband would ultimately let her down was lurking beneath all the happier moments. Anderson had a stillness which ably communicated the inner strength of Nora despite the childlike persona she presented.


Toby Stephens was an excellent Thomas (Torvald) at first seemingly rather loving but who in moments of stress showed his true possessive harshness. Yet the strength of his performance meant that his wailing at the end of the play raised some level of sympathy- he was after all, part
of the same imprisoning gender expectations as Nora; only Nora was able to see it and break away from it. 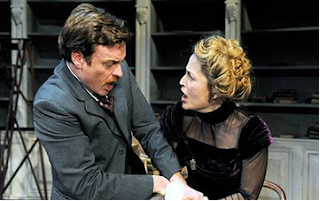 Anton Lesser was a powerfully present Dr Rank, whose underlying note of sadness seeped out into his relations with Thomas and Nora . His final exit (final in more ways than one) was muted and loaded with sorrow.

Tara Fitzgerald was an iron clad Christine Linde, chiselled by wretchedness and hardened by solitude. Her relationship with Nora was on the lines of a scolding aunt, chastising and reprimanding but ultimately supportive. There were moments when she showed the Christine untouched by the vagaries of life and this warmth mostly came out in her scene with Chris Ecclestone. Her lines ’I’ve missed you every single day’ felt like they were being wrung from deep within. Here we were seeing so many of the characters breaking free from the limitations imposed upon them. It should have been the ‘miracle’ for Nora and Thomas as well- but sadly not. That was their tragedy. 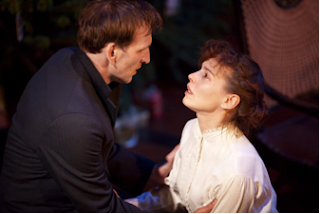 Chris Ecclestone was outstanding as Neil. Full of energy born of shame, resentment and anguish his vitriolic outbursts and bitter reproaches were corrosive. Yet when he is ‘rescued’ by Christine there was a profound sense of joy. His performance was marked by its passion and I for one thought it outstanding. 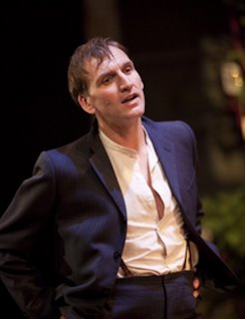 It was of course an outstanding production.

And with that the door slams behind her.
Email Post
Labels: 4 stars Donmar England jules