A sad tale is best for Winter.

The Winter’s Tale. RSC. Courtyard Theatre. Stratford Upon Avon. 30 August 2009.
I love The Winter’s Tale. I know I talk about this quite a lot but it is one of my favourite Shakespeare plays: The possibility of redemption for even those who have made huge, glaring, gut-wrenchingly immense mistakes. Hope for us all.
I had heard a few mixed reviews of this production so I did not have incredibly high expectations before heading along. My old Shakespeare sparring buddy had pulled a face when we talked about it; but then she often does that. I recall quite vividly a heated debate about Leontes (she didn’t want to let him off the hook) so I wandered into the courtyard (rapidly becoming my second home) not necessarily looking forward to what I was about to see.

And then the play began and the starkness and tragedy of the first half bowled me over like a freight train. Greg Hicks (Now officially renamed ‘mighty’ by me) was an excellent Leontes; tetchy, passionate, broken, pathetic (In both the actual and everyday sense of the word) and verging on insanity. Katherine Hunter was a restrained Hermione but NOMA DUMEZWENI as Paulina was as sharp as a stiletto. 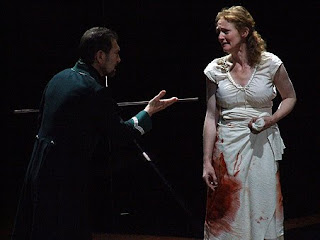 As the shattering first half rattles to its conclusion the weighty tomes on the shelves surrounding this centre of stability comes crashing down: the chandelier smashes and everything goes awry, nearly collapsing on Leontes as he stalks off stage into the tempestuous wind which blows as the world of order collapses.
However as good old faithful Camillo gets eaten up 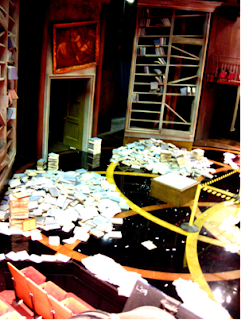 by the bear (actually very scary in this production; made of paper with glowing eyes as it emerged from the dark) the second half of the play began to falter. Now to be fair this often happens-the transition from tragedy to comedy often wanes but it was the sadly lack-lustre performance from the two young lovers which held this back. For a couple of young lovers flirting and edging round their youthful passions they could have been talking about- I don’t know blancmange, or crochet or fish fingers for all the intensity of their conversations. Following this was there was the less than subtle dance at the sheep shearing which owed more to Big Brother than the pastoral idyll. 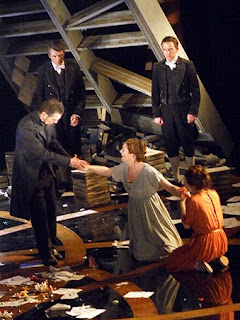 I was grateful to get back to the dark, cold land of Leontes. There was a delightful moment when Leontes and his daughter go to see the statue where he hesitantly and with some disbelief puts his hand onto his daughter’s shoulder. A small gesture but brim full of such intense feeling it made me sniffle into my sleeve. And as the statute comes to life and the audience are reassured that life can give people a second chance, I was not the only one with a trickle of brinish tears.
All in all Shakespeare’s brilliant play gets across, but it could have done with a better second half.