And they all lived happily ever after? 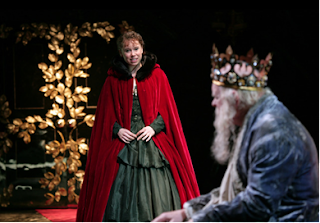 All’s Well is quite a dark play really, for a comedy that is. Similar in tone to Measure for Measure, All’s Well has at its heart the plucky determination of the brave Helena. Doggedly she has set her heart upon the pompous little poltroon Bertram.

In this production Bertram starts off playing about on stage with a toy sword in slow motion matrix style. As he does so he is lit in silhouette with tall shadow-craggy castles looming over and the shade of rooks sweeping over head. The castle is lit with dusky silver giving the whole stage an ethereal yet sinister edge- like true fairy tales.
As Helena makes her way to court to chance her heart the stage become slowly filled with gold but as our intrepid heroine plods slowly along the edge of the gothic ravines all we see is her red cape and sparkly shoes; a cross between little red riding hood and Dorothy in Oz. Visually this was a splendid piece, the stage bathed in bright sparkling radiance or filled with echo-shadowlands. Crowds of victorious soldiers swept in slow mo across the stage wielding flags and cheering, women in vibrant fifties costume gaze on through fairy lit olive groves,

As to performances Oliver Ford Davies was as always excellent in the role of fusty aged King, bumbling and harrumphing his way through ill heath then good. Claire Higgins was excellent as the Countess; imperious enough to be convincing but other than Helena being one of the few sources of warmth in her frosty castle. She seems a vaguely aware that Bertram is a fatuous youth whilst Helena is the true sources of goodness. Given the sparkly shoes and cape for her journey, the countess functions as a kind of fairy godmother. 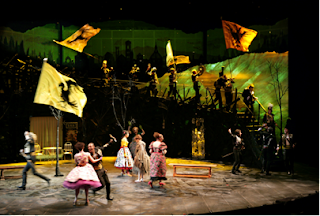 Michelle Terry as Helena was suitably feisty, donning playboy outfit with fox ears to lure Bertram into the bed trick and Conleth Hill as Parolles was cringy and strangely likeable as he should be.
In the best of all fairy tales this production went for a slightly darker underbelly at the end of the story; more Hans Christian Anderson less Disney. As Bertram and Helena are finally ‘happily’ married- compete with Ok style celebrity photos- the lights dim as the happy couple look out to the audience, staring, bemused, and verging on horrified.