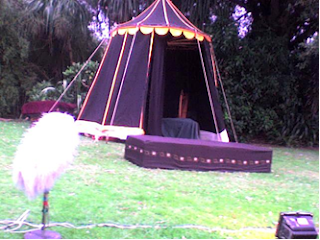 For any avid readers of these fine epistles, the Botanic Gardens may well strike a chord as a venue attended before. So, clearly, it must be that time of year again when Theatre Set –up visit the Isle of Wight. This travelling troupe has been coming to the fair isle of my abode for donkeys’ years now, and every year come rain or shine I have pootled along to the sleepy seaside town of Ventnor to see their own brand of Shakespeare.

To be fair there are a fair proportion of the cast who are always quite entertaining if not at times convincing. It has just become rather a tradition to treat it with a gentle but ultimately affectionate mockery.
So what of Cymbeline? Well. It was quite entertaining merely to tick it off the list of ‘plays by Shakespeare still to watch’. Cymbeline is one of those plays that contains every ridiculous farfetched plot contrivance Shakespeare could think of; you name it- It’s in there. Cross dressing? Check. Huge misunderstandings with potentially tragic outcomes? Check. Scheming women? Check. Battles, fights, lost children, heavenly visions, Romans, poisoning, Lechery? Check check check! The only version I had seen previously was one of the by turns famous/infamous BBC Shakespeare’s – such a woeful pageant it is remembered largely for being very very funny for all the wrong reasons; so it was refreshing to see it happen in a theatrical context- because weirdly, and for no discernible reason- it actually works. 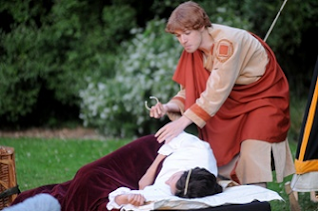 So what of my old friends Theatre set up? They were actually quite good. For me Peter Lundie Wager as the ultimate Italian sleaze Iachimo was rather entertaining and Elizabeth Arends who made a convincing Pisanio was thoroughly watchable. Interesting also was the doubling of the idiotic and deeply unpleasant Clotten (played largely for laughs in this production) and the equally idiotic Posthumous . (played by Tony Portacio) Posthumous is a character I find it tricky to empathize with but still his performance was ultimately quite compelling.

So, all in all a good evening. Of course the extra entertainment comes from the eating of brie, pork pies and drinking of wine alongside the hiding form twilight drizzle under a cavalcade of coats and blankets. With that, what’s not to enjoy? 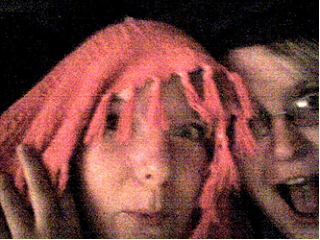