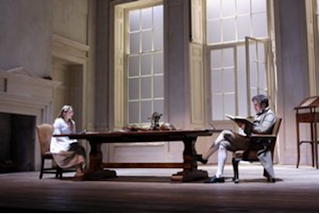 On route to see Arcadia I tried to remember what I remembered about Arcadia.
Plautus the tortoise and the laws of thermo-dynamics.

I was sure it must have been better than a reptile and the potential frostiness of space. I had studied Arcadia at school a whole decade ago and vaguely remembered a joke about a dahlia, poets, Byron, a country house, maths. A lot of maths. With my shrapnel cluttered memory it was impressive I could even remember Plautus.

Of course the best preparation for a matinee is obviously snuggling down for a cup of tea and a cake in a converted crypt, so after some St Martin’s delicacies and a quick discussion with a fellow scholar on what Arcadia was about we wended our way to the theatre.

The Duke of York’s is one of the numerous Edwardian theatres that live in the environs of the National gallery, loaded with crystal chandeliers and gilded cherubs. We sat up in one of the worryingly high seats (which should be cheap but aren’t) and looked down upon the stage which was all light and airy spaces, with a central long table.

This was very funny production, with young Ed Stoppard proving perfectly un-irritating as Valentine. (I say this in all seriousness as whenever I have seen Young Mast 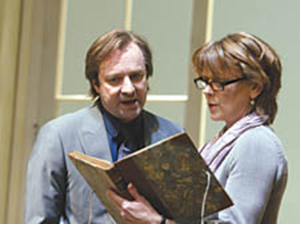 er Stoppard before he has always for some imperceptible reason just... irritated me) Samantha Bond played a powerfully strident Hannah with flashes of vulnerability. Neil Pearson was pitch perfect as the smug, seedy academic Bernard carried away with his own lecherous pomposity. Dan Stephens (soon to be in a film paying Russian detective legend Erast Fandorin-calm. Calm) was funny and gentle as the much put upon Septimus Hodge (always having to satisfy members of the family in one way or another.

It was an entertaining production with a surprising amount of laughter generated heading towards the ultimate chill of which the play speaks all the way; a cold universe devoid of life. There is something of this poignancy in the productions final scene- the two time frames merging in and out of one another with couples form both the post enlightenment world and the modern world serenading together. 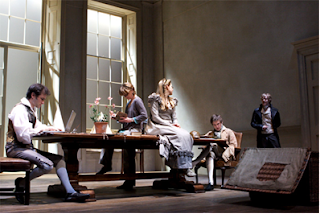 In fact it was a strong production form the whole cast; funny and poignant.