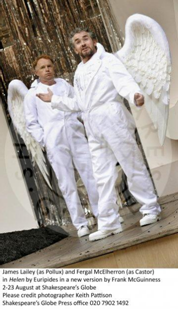 After an exciting afternoon with Troilus and Cressida it was back to the Globe to see what I think was my first actual Greek play; Helen. A sort of millennia old Monty Python was the way it was billed and it certainly had elements of that.


Plot twists, convoluted and farfetched actions alongside Castor and Pollux providing heavenly intervention and odd jobs (they spent the opening of the play attempting to add building parts to the set and thus followed a The Plank style set piece of missing tools and falling workmen to appear later being winched down from the gods into a wheelbarrow with a thermos of celestial tea.) 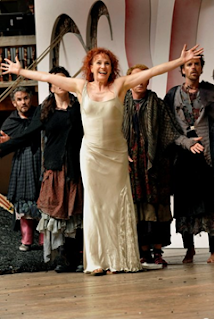 The lead was convincingly and passionately evinced by the splendid Penny Downie, who I I have now become an official geek about; feisty, passionate and impelled by the injustice of her situation she was the real Helen who had been replaced by an identikit version by an angry goddess, to be dumped far away on the coast of Egypt whilst her reputation is torn to shreds, her friends and family ignominiously killed in the continuing bloody saga of the Trojan War. She convinced as the desperately sad and wretched woman, the stoic and the lover whose husband is miraculously returned to her. 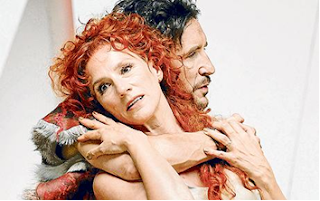 Menelaus was played with passion and intensity by the rather delightful Paul McGann (Geek note; that’s 4 Dr Who’s in total now!) The fiery relationship between him and his reclaimed wife was joyful, moving and by turns exquisitely funny. At first, realizing his ship has been wrecked and he is pretty much alone upon the shores of a strange land he falls to his knees and was wracked with sobs. Later he, in a fit of teenage effusion, leapt into a passionate kiss with his beloved. The pair were mesmerizing. 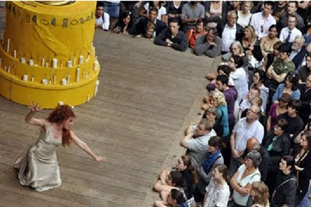 Being my first proper foray into the world of Greek drama it took an initial getting used to watching a Chorus singing and the like throughout the story, echoing Helen’s words and sobbing as they realize Helen will leave them in Egypt as refugees. However after a little while one’s mind readjusted to the spectacle and as the play rattled along at a rate of knots so soon became another part of our journey.


The translation by Frank McCourt was muscular and energetic, juxtaposing mildly anachronistic ideas; discussing the gods alongside racist diatribe rant and the occasional rather modern swear word. However this peppering of modern familiarity added to the spicy flavour of the play and created humour and pathos.

The stage was flooded with yellow and golds of Egypt and giant letters (Spelling if I remember correctly LOVE) with a ramp thrusting down into the groundlings to involve us in the action.

This was a vibrant production full of energy, passion and light; farcical, frenetic yet ultimately rather life affirming.