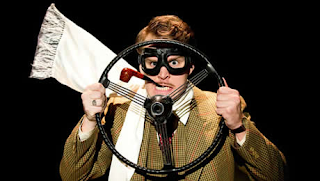 Just watch the video trailer on their site and you will realize why I have wanted to see this play for the last two years.

Thanks to the cultural Olympiad, tickets were available at a splendid savings rate , thus two of my dear friends and myself got togged up in our vintage finery, chin-chinned with some pimms and pootled along to the Criterion. 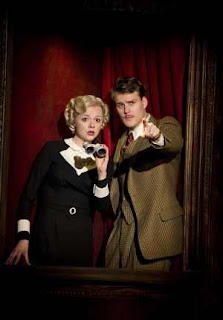 Being a fan of the classic Hitchcock spy romp this production is based upon (Robert Donat on top form) I was pleased to see the elements of suspense were still there, but largely played down in favour of the mouthful of marbles British comedy. Vintage tweeds, pipes, Cockerney accents  and a dashing hero with an attractive pencil thin moustache meant all the elements for a jolly fun night were there. 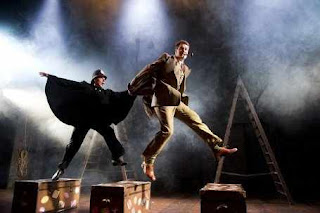 With only four actors playing all the parts, there was a good dash of anarchic, amusing stage business –swapping between roles with some deft hat changes , dashing between doors and moving door frames to convey a sense of time and space. An entertaining shadow-play, showing Hannay escaping across the Scottish moorland chased by policemen, a bi-plane and the Loch Ness Monster, added to the perfect tone of gentle silly humour.

Our hero was played as both suitably charming and wry, with a shade of no ‘begod nonsense’ earnestness about him; the right mix for our adventuresome protagonist. We cheered him with gusto, hallooing huzzars and bravos after his emphatic speech extolling all round decency and goodness and giving a poor bloke a fighting chance speech.

So maybe this was not Chekhov, Ibsen or Shakespeare; but it was terrific fun and true to the stiff upper lip spirit  of the Hitchcock film. John Buchan may well have been spinning in his grave – but if he were it would only show him up as a terribly bad sport; Bad show old chap ,as this was ,undoubtedly, a terribly good show.