Fly is an homage to the Tuskegee Airmen, the unit of African-American pilots who served in WWII.  It follows four of these men through their training and as they go to war, exploring the conflicts and camaraderie among them and the racism that they experience and, sometimes, overcome.

The production is beautifully designed, with a number of geometric panels arranged at the back to mimic the panes of glass that would surround a pilot in his aircraft.  These serve as projection screens for photos, and, most often, for videos of clouds and bird’s-eye view landscapes.  The rest of the set design (by Beowulf Borritt) is very simple, with a number of trunks and chairs effectively rearranged to denote different locations.

With these components, plus the use of strategic movement, sound design, and some liberal helpings of stage fog, the production is able to portray the pilots in flight, both in training runs and in dogfights – something I don’t think I have ever seen on stage before.  These sequences were all very effective for me; my stomach dropped the first time that one of the characters ‘took off’ and I got caught up in the anxiety of the fight scenes.

Movement was also used successfully throughout the rest of the piece, particularly in some sequences involving army drills and more poetic dance sequences. 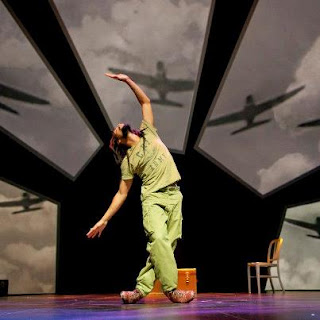 Another important component of the piece that deserves mention is the convention of having a “Tap Griot,” a character who tap dances to underscore emotional moments and express what the other characters might not be able to. He also occasionally recites some poetic lines, plays side characters, and serves as an on-stage stagehand, moving props and assisting with costume changes.

For me, this convention didn’t entirely work.  The help with scene changes and some of the underscoring was effective, but the character kinds of falls off and disappears for the last part of the play.   I also got hung up on the word griot –  a storyteller and entertainer in some African cultures.  This made me think that he would be acting as some type of narrator or the primary person telling the story / conducting the action throughout, but there is another character who functions in this way, so it felt like there was some doubling up there.

Overall, however, the show was very successful.  I was engaged with and rooting for the characters throughout and was truly blown away by what the production team was able to achieve with the fight sequences.  I do wonder if it would have felt overly sentimental, pandering, or too simplistic if done at another theatre company, but at Ford’s it perfectly fit within their mission of producing “works that captivate and entertain while examining political and social issues related to Lincoln’s legacy.”