It had been some time since my last foray into the well trodden byways of Warwickshire’s finest. Upon my return I was eager as always to see The RSC’s latest outpourings. 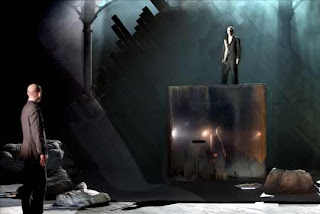 The sun shone merrily as my fried and I jostled our way though the heaving August crowds fed the swans and explored the RST. Following the traditional ’60 second Shakespeare’, this time complete with flying props (and a proposal for fringe festival from members of the public...watch this space), the whole hearty group of us breezed into the RST.

Naturally (for any of you who know my theatrical tastes) I was terribly excited at the prospect of seeing Jonathan Slinger again, this time in the role of Prospero.

Farr staged the island with a bleak, almost barbaric, greyness. Rocks emerged like volcanic leftovers and everything was marked out with a mixture of harshness and frail comforts –these being suggested by the rickety, distressed school desk and chair.

A clear Perspex box functioned with diverse purpose as the exterior of Prospero’s cell, the ‘sinking’ ship and the place to which Prospero retires to plan. A simple but effective visual detail –although in the opening scene something of the sound was swallowed, sucked into the space thus detracting from the impact of the opening scene.

The spirit world of the play weaved neatly into the play-world reality, with Ariel blending and merging, dressed in a matching ensemble to Prospero in dusty suit and cropped hair. 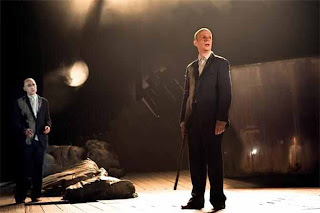 Slinger made a powerful and unpredictable Prospero. Playing up the mood swings and sense of loss as he slowly lets go of the only control he has –that over his enemies and his daughter- he presented a complex character, accentuated by moments of piquant poignancy. Displaying his usual flair for pulling emotional resonance from a single word , like a potter pulling figures from clay, he laid bare the patriarch’s vulnerability when telling Miranda of their mutual back-story and stumbling, cracked voice and tearful, over the word ‘mother’ creating fathoms of emotional depth.

The scenes between Miranda (Emily Taaffe) and Ferdinand(Solomon Israel) – sometimes a dull, saccharine vomitorium- were playfully and lightly played. Their tentative love match, a youthful and sweet delight. Pleasingly these scenes were also imbued with humour – I rather enjoyed Ferdinand’s laddish yet coy confession ‘for several virtues have I liked...several women’. 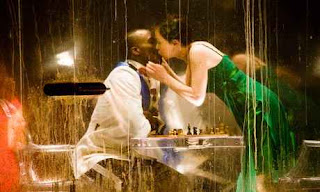 Caliban was a post –colonial interpretation but hardly a sympathetic one. A large grubby man with halting speech there were only fleeting moments of sympathy for the ‘moon calf’. It was an interesting construct – no nobler than the bawling drunkards Stefano and Trinculo. Their scenes together were, however, very funny playing for every ounce of silly comedy.

Whilst perhaps not a groundbreaking production, this nonetheless had the right mixture of magic, merriment and melancholy to make it another gem in the RSC Summer Season.
http://www.rsc.org.uk/whats-on/the-tempest/