I’m back again, this time to talk about The Government Inspector at Shakespeare Theatre.
(Full Disclosure: I have previously worked in the STC Education department.)

So, in a nutshell: the show is fine.  Just fine.  Not great, not bad.  Just functional. 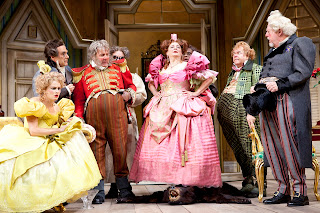 To expand on that a bit….

The Government Inspector is STC's first production of a Russian play.  It is a comedy by Nikolai Gogol (here adapted by Jeffrey Hatcher) about a small, thoroughly corrupt, backwater town in the Russian provinces.  The locals receive notice that a government official will be arriving to inspect their town.   Knowing how badly things are the run, the mayor, the judge, the hospital administrator, the school principal, and some landowners quickly try to make some cosmetic changes to make it seem as if everything is well-run.  They also decide that they must charm, and, if he is willing, bribe the government inspector into giving them a good review.  By chance, a low-level government official, Hlestakov, is staying at the local inn and is mistaken by the townspeople for the inspector.  He is a spendthrift gambler who is deeply in debt.  He is confused at first by the townspeople’s attention, but soon plays along, trying to get all that he can from them.

One of the great things about Shakespeare Theatre’s production of The Government Inspector is that it gathers a lot of wonderful DC actors, including Sarah Marshall, Floyd King, and Nancy Robinette, in one place.

The most frustrating thing about it was that it felt like the majority of these great actors were working very much within their comfort zones and that the director didn’t add anything to the production.  STC previously performed the play in a staged reading format, with many of the same actors, as part of their ReDiscovery series.  I can imagine the stage reading being about the same as the production.  It doesn’t felt like anything was discovered in the rehearsal process.  It is just funny actors effectively delivering Jeffrey Hatcher / Gogol’s lines.  There isn’t much energy among them, the acting choices (mostly) don’t match the oversized and outrageous costumes, there is little added physical comedy, and there is little interaction with the set and props.

One notable and funny exception to that last bit is actor Harry Winter playing Dobchinsky.  At one point, the townspeople are gossiping about Hlestakov behind his back.  In a classic bit, as Hlestakov is about to re-enter the room, someone calls out to act naturally and, of course, they all run and do various un-natural things.  Dobchinsky runs to a nearby table with a small jar with a lid on it and starts rhythmically opening and shutting it the lid.  It is the tiniest bit of business, but more unexpected and specific choices like that would have helped to round out and add some texture to the show. 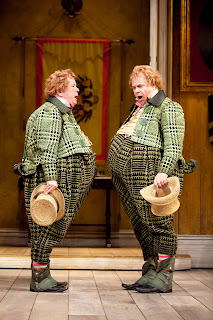 Also, the townspeople tend to blend together.  The only ones with sharp outlines are Floyd King as the Postmaster and the Claire Brownell as the Mayor’s Daughter, Marya.  It’s not that you get confused about who is who with everyone else, but it is just that they don’t have any defining characteristics.  It is if the Postmaster and Marya are sharply outlined in pen and ink, precise and defined, while everyone else is in watercolor.

Again, overall, nothing about the production is bad by any means.  But, it seems as if there were missed opportunities.

To be fair: I might truly be in the minority here.  Eavesdropping on people leaving the theatre, the overwhelming vibe of the chatter was positive. “That was so funny.”  “The actors were so committed.” So, judge for yourself and let me know what you thought in the comments.