Shakespeare Theatre's The Dog in the Manger

Theatre is ephemeral. You see a production and then it is gone, you will never get to relive it. Well, almost never. Back in 2000, I saw the premiere production of David Johnson’s translation of Lope de Vega’s The Dog in the Manger at the Royal Shakespeare Company. The production was so utterly alive. The translation was clever and modern. The show grabbed you from the start and sizzled all the way through.

The Shakespeare Theatre just opened their production of the same translation. Though it has a completely different production staff and cast (though the reflective floor and abundance of rich black fabrics takes its cues from the original), the delight this production engenders is precisely the same as that original production. Instead of being left to compare Jonathan Munby’s production unfaithfully with the original, I have been blessed with a second production that gets the play exactly right. 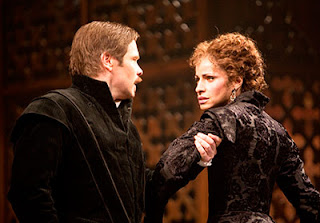 Michael Hayden as Teodoro and Michelle Hurd as Diana in the Shakespeare
Theatre Company’s production of The Dog in the Manger,
directed by Jonathan Munby. Photo by Scott Suchman.
The beautiful and proud Diana, Countess of Belflor (Michelle Hurd) is unmarried, and planning to stay that way, though she is pursued by two rich nobles, Count Federico (John Livingstone Rolle) and the Marquess Ricardo (Jonathan Hammond, fantastically committed to the utter ridiculousness of his character). She seems unable to love anyone, until she discovers that her secretary, Teodoro (Michael Hayden) and one of her ladies-in-waiting, Marcela (Miriam Silverman), are in love. Suddenly, Diana feels passion for Teodoro, but her honor forces her to fight it, since he is of a lower status. She toys with him, casting favor towards him, then snapping it back. Teodoro in turn woos and rejects Marcela depending on whether he thinks he is likely to rise in his station in life.

They aren’t very likeable on the page, nor very kind, yet when Teodoro and Diana are brought to life properly, you just don’t care. You enjoy the back and forth, the hot and cold, the ridiculousness of love. And though rationally you know that the fact that the play ends happily only for the two of them should bother you, it doesn’t. Because the journey was just plain fun. Hurt is an excellent Diana, graceful, unreachable, and enthralling. Michael Hayden is not the traditionally dashing leading man, though the casting choice works. His surprise and utter bemusement at Diana’s treatment keep him within the audience’s sympathy. 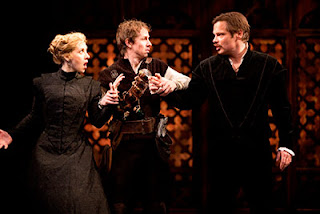 Miriam Silverman as Marcela, David Turner as Tristan and Michael Hayden
as Teodoro in the Shakespeare Theatre Company’s production of
The Dog in the Manger, directed by Jonathan Munby. Photo by Scott Suchman.
The other actor who really succeeds in keeping this play moving is David Turner as Teodoro’s servant, Tristan. Turner’s timing is impeccable, his dry wit delectable, his visceral physical response to twists of the plot highly amusing.