Fabulation or, The Re-education of Undine, Lynn Nottage’s newest play, is a comic romp through one woman’s complete economic ruination, forcing her to confront people and places she thought she left far behind, i.e. her family and home. CENTERSTAGE’s production is carried by the solid presence and engaging performance of attitude given by its leading lady, Natalie Venetia Belcon. 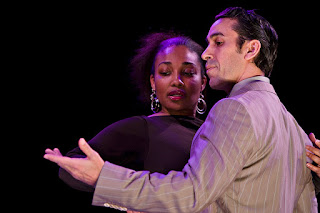 Natalie Venetia Belcon and Robert Montano
The supporting cast is also strong, particularly Lizan Mitchell who plays Undine’s junkie grandmother, and a jail inmate not to be messed with. And while the play’s ideas don’t feel all that new, they are certainly timely as the state of our economy reminds us that there is more to life than our careers and our money. Director Jackson Gay heralds this sassy production that is thoroughly entertaining.