I'm of two minds about The Two Gentlemen of Verona, Shakespeare Theatre Company's latest offering, driected by PJ Paparelli. On the one hand, there's a hell of a lot to love in this production, from the cast to its energetic staging and some of the best character-centric costume design I've seen in a while. On the other hand, remember that oft-quoted Coco Chanel directive about always taking off one accessory before you leave the house? I could have happile axed some of the extra-textual additions to this production and never felt their loss, except by the overall improvement of the piece.

First, the good. Paparelli's direction emphasizes the youth of Shakespeare's characters, setting them in a world of modern day of stagnated suburbs and urban excitement. The incredible rashness of the titular gentlemen, Proteus (Nick Dillenburg) and Valentine (Andrew Veenstra), seems to make a lot more sense through this lens than in any other production I've seen in the past. Miriam Silverman is excellent as Proteus' spurned first love, Julia, and it's nice to Natalie Mitchell return, once again, as her romantic competition as Silvia (last season, Mitchell played Diana to Silverman's Helena in All's Well). Adam Green and Euan Morton are genuinely funny as Shakespeare's clowns, Speed and Launce, which is no small feat (sweet heaven, there are SO MANY UNFUNNY CLOWNS in Shakespeare productions). 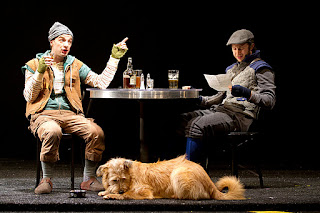 Euan Morton as Launce, Oliver the dog as Crab and Adam Green as Speed in the Shakespeare Theatre Company’s production of The Two Gentlemen of Verona, directed by PJ Paparelli. Photo by Scott Suchman.

I'm also not ashamed to say that I have a giant crush on Paul Spadone's costumes for this show. They're a GLORIOUS contemporary spin on Elizabethan costumes that manage to perfectly evoke period while coeexisting in a contemporary setting. Just take a look at Julia's first costume: 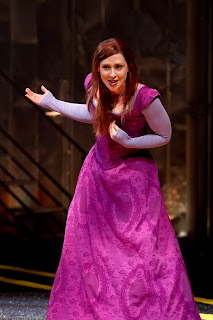 Miriam Silverman as Julia in the Shakespeare Theatre Company’s production of The Two Gentlemen of Verona, directed by PJ Paparelli. Photo by Scott Suchman.

The silhouette is pure period while the print looks exactly like something you'd find in a dELiA*S catalogue, a teenage fanatsy of an Elizabethan pattern. Or take any of the men's costumes in the first scene- we see jeans and trainers, but paired with doublets in a modern cut. It's a brilliant way of bridging the gaps between our world and Shakespeare's, a visual guide to Paparelli's entire thematic thrust for the production. If this were less of a review and more of a note passed in middle school, this is where I'd just cut to the chase and write:

But it's not all roses and costume crushes, sadly. Paparelli is so taken with his concept of a teenage world run on hormones and passion that things get a little away from him. Supertitles appear above the stage before every scene, eliciting laughs from the audience by snarkily telling us when and where we are each time. Except, shouldn't I be able to figure that out by the acting? The opening sequence is done in a series of quick scenes of Valentine and Proteus drinking and partying with their friends, on and on into the night. Do I really also need an outside voice telling me that it's getting later and later if I can see that in how the actors are playing each subsequent moment? In addition, Shakespeare didn't much care about time and specific location as he wrote- his plays are a hot mess if you're trying to pin down timelines and settings for each moment. We don't normally notice and/or care overmuch if the play is allowed to just progress on its own terms, but when we're told "A week later!" "The next night!" "A week earlier!"... it's a bit much.

Music plays a huge role in this production, more so than I really expected. Normally, this is a huge plus for me, and the plays themselves are so often filled with music as it is. But in a production that places so much value on being modern! contemporary!... and then has a soundtrack that's 10-20 years out of date, the effect is pretty noticeable. When the characters themselves break into song and we have to accept the juxtaposition of Shakespeare's poetry and Bono's lyrics, well, one of those boys is going to come out the clear loser in THAT contest, kids. It's a lot to ask of the audience, and I just wasn't willing to follow there, no matter how earnestly Paparelli wanted me to go, or how talented the actors are. 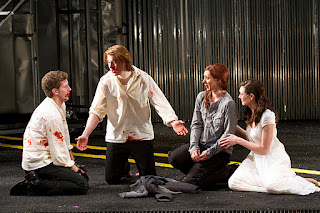 Nick Dillenburg as Proteus, Andrew Veenstra as Valentine, Miriam Silverman as Julia and Natalie Mitchell as Silvia in the Shakespeare Theatre Company’s production of The Two Gentlemen of Verona, directed by PJ Paparelli. Photo by Scott Suchman.

If I sound like a party pooper, I don't really blame you. I wouldn't mind these issues so much if I didn't feel cheated by the final scene of this production. Shakespeare takes his characters to a dark and dangerous place, and for contemporary audiences, we have to question the resolution the characters ultimately find. Paparelli, on the other hand, doesn't take us to the places that the text promises. I didn't feel the danger posed to Silvia and I didn't buy the happy ending we're forcibly serenaded with.

There's a lot to love in this Two Gents. I love the energy, passion, and use of space in Paparelli's staging (and hey, set designer Walt Spangler! That sexy little catwalk can stay in the Lansburgh FOREVER, it was so brilliantly used by the director). I think that a lot of folks who normally feel cut off from Shakespeare are going to be surprised by this production, and I certainly hope that holds true for the high school students coming to the SHAKESPEARIENCE matinees for this show. If I gripe, it's because I care. As a Shakespeare (and Shakespeare Theatre Company) fan, it's not that I'm angry- it's just that I'm disappointed. There's so much good, so much promise in this production that I feel cheated by its easy resolution. I recommend this production to a lot of folks, but if you come out of the night and need to take a long break from Bono, know that you're not alone.
Email Post
Labels: Capslock rudesby Shakespeare Theatre Company