Ibsen's "Hedda Gabler" is a play that can be hotly debated amongst his fans and detractors, and has in fact been done so since its premiere at the end of the nineteenth century. It's a brilliant examination of a fascinating character, held up for the scrutiny of an audience as she twists and turns as circumstances contrive to compel her toward that inevitable ending. 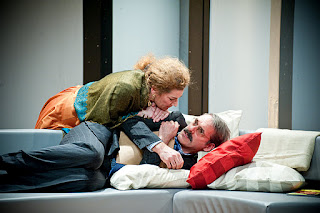 Scena's production, directed by Robert McNamara and which opened last weekend, uses a translation by Brian Friel to great effect. Audiences familiar with Hedda's story will no doubt examine her and her fellow characters in a new light, and newcomers will see why she has captivated imaginations for over 100 years. In the title role, Kerry Waters manages to walk the tightrope of conveying Hedda's inscrutability while leading the audience to see the utter inevitability of her actions. We can never understand how she could do such a thing... but of course that's what she needs to do, can't you see? It's a wonderfully nuanced performance- just watch her face as the other characters speak and you'll see that she's actually speaking volumes.


Waters's isn't the only excellent performance on the Scene stage. Lee Ordeman is brilliant as Hedda's professorial and aunt-loving husband, George Tesman. Every second you see him onstage, your skin prickles with the certainty that he's a perfect storm of The Worst Possible Husband for Hedda Gabler, and it's wonderful. I've never seen the role played this way and it's a performance that's going to stay in my memory for a long time- who goes to see "Hedda" and gets blown away by George Tesman??


I was also impressed by Danielle Davy's Thea. Davy creates a perfect contrast to Hedda's cruelty- a shining angel of goodness, saving fallen men and inspiring genius within them... except that's not all. Davy's Thea has an unexpected steeliness within her that matches Hedda's, one that will not be swayed from her chosen prizes and intents. Watching her performance, something clicked and I saw Thea in a new light, one I'd never considered before. It's a wonderfully realized interpretation of a character that can be easily dismissed- not so in McNamara's production. 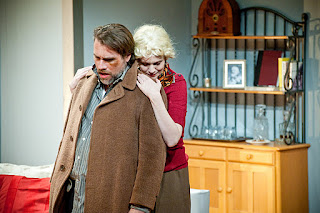 It's a captivating evening of theatre, but I would be lying if I didn't confess that I have a bone to pick with the production design. McNamara has chosen to set the play in the Norway of 1938, and in the production's attempts to match Ibsen's meticulous instructions for realism, design elements fall flat again and again. The set is decorated in a hodgepodge of mismatched Ikea furniture, lighting cues were distracting, and several costumes end up looking like they came from a costume rack in a community theatre (not to mention, oh lord, the WIGS). I don't think it's necessary to create a meticulously crafted period world for the characters to inhabit, but if you want to try, the devil is in the details and here, the details just don't add up.


It's a pity that the design doesn't equal the quality of the performances on display. This an excellent, exciting production that makes me want to dive back into Ibsen all over again. Come for the Hedda, stay for the rest of the ensemble, and don't pay too much attention to my griping about the design- I recommend this production heartily.
Email Post
Labels: Capslock rudesby scena theatre