Propeller are one of those companies I had never got round to seeing, despite their international reputation as a talented and thought- provoking all male ensemble. Every now and again I would have a look at their website and say to myself ‘I really must go and see these guys’. Then I would absentmindedly forget to buy tickets resulting in theatre envy when people would tell me about another of their impressive productions.

So, after six years or so, I finally got some tickets sorted. It was to be a day of firsts –my first time seeing Propeller and my first Shakespeare production featuring the music of The Pogues and The Clash. For several of my friends who came with me this would be their first Shakespearean History and their first time not only in Brighton’s sweet Theatre Royal, but in Brighton itself. This being the case I really wanted it to be a good production of much loved Henry V, so they would come away as arm-wavingly enthusiastic about this anthemic piece of theatre as I am.

After what has become, for many of my dear friends and family, an obligatory ‘Julia recreates Shakespeare with pub utensils’ run down of Henry V, we headed through the crowded Lanes, tearing ourselves away from the ditsy vintage shops, comic book stores and bric-a-brac havens toward the Regency gem (For more thoughts on the theatre itself see this reviewer’s previous post on Hedda Gabbler.). 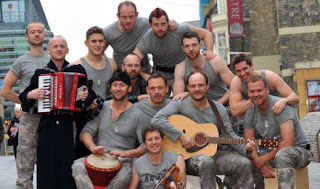 Emerging from the rear of the stalls came a rag tag bunch of modern dressed soldiers, marching in time to their song of ‘A Pair of Brown Eyes’. The stage was barely set with little more than a few chairs and a scaffold. The company then presented the Chorus, an interesting little touch highlighting the ensemble nature of the company.

Gradually in their meta-theatrical troupe, this cast of squaddies became Kings and Princesses, heroes and rogues. The ladies' presence was particularly entertaining – the French princess being wolf-whistled whilst wiggling ‘her’ petite derrière en route to the bath. The Sergeant Major’s only nod to femininity was a skirt. Resplendent in military mustachios it was a deft comic touch. 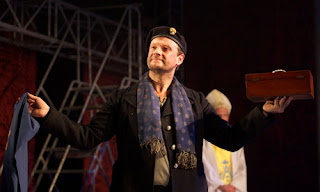 As to be expected , the French court were suitably vain and swaggering, signalling their presence with the sudden putting on of shades and nonchalance – Gallic shrugs abounded as did the odd chanson d’amour, accordion and Edith Piaf melody. It added a light touch to the play which neatly elevated the mood from the more serious, physically threatening scenes. 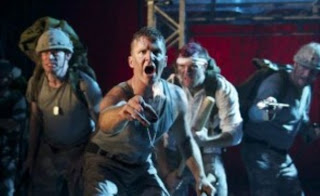 This was a visceral production, with men running toward the audience at times in full attack mode (rather disconcerting for those of us in the front row) and with violence staged effectively and hard hittingly by the attacking of punch bags – each blow to the bag then being acted out by the unwitting recipient of the savage treatment.

During the interval we were treated to a few more stirring songs – raising money for charity – in which our enthusiasm bubbled over into whooping and cheering. It was one of the liveliest intervals I have ever been at. 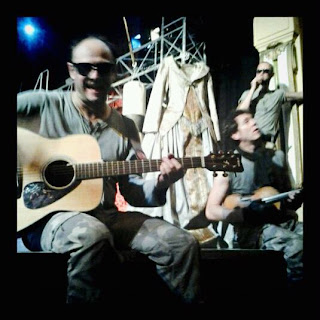 As we shuffled back into the auditorium we had a little natter with the ‘French’ courtiers as they got back on stage, preening and singing. (For any RSC Histories Die Hards you will be pleased to know Mr Nick Asbury was one such, still in fine friendly form as ever – I believe he has a blog running for his time with Propeller too. I could not help but wonder of course if he desperately wanted to be playing Pistol. http://www.guardian.co.uk/stage/series/on-tour-with-propeller)

This did feel like a real ensemble piece –which is unusual for Henry V as old Hal is the focus for so much of the play. Tony Bell played Fluellen with great comic timing, yet with a tremendous poignancy when he discovers the boys’ dead in the luggage. Gunnar Cauthery was a delightfully arrogant Dauphin, resplendent in his arch petulance and sneering disregard. Karl Davies packed an emotional punch as the spindly boy in dodgy seventies NHS specs whilst also being entertainingly alluring as the silkenly adorned Katherine of France. Dugald Bruce-Lockart as Henry was softly spoken yet with an underlying current of icy fire which was utterly believable in a military leader.

Masterfully executed, powerful and full of piquant muscularity Propeller created a magnificent piece of ensemble theatre. As l had hoped for, we all left the theatre waving our arms enthusiastically and wanting more.
Email Post
Labels: 4.5 stars England jules