Tonight Ford's Theatre begins performances of Horton Foote's The Carpetbagger's Children. In a series of charming, humorous and poignant vignettes, the play weaves a captivating tapestry of family secrets, small-town lives and private tragedies. At the center of the play are sisters Cornelia, Grace Anne and Sissie, daughters of a Union soldier who moved south after the war. The sisters’ bonds are challenged as they seek to preserve the family’s Texas plantation in an era of startling growth and change. 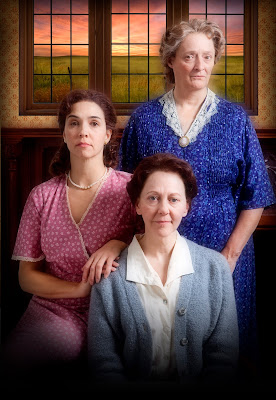 (Holly Twyford, Kimberly Schraf and Nancy Robinette photographed by Scott Suchman. Artwork by Gary Erskine.)
Perhaps most exciting about this production is the cast. Ford's Theatre brings together Nancy Robinette, Kimberly Shraf, and Holly Twyford. From the preview we attended on Wednesday night we could see that even though the play is a serious of monologues, the three actresses were fully involved in the story at all times. There may not be much in the script allowing them to play off of each other, but they make the most of what is there. The three women appear on a circular stage, surrounded by an expansive backdrop of blue and green and brown. There are a few stage items - a couple chairs, a table, some framed pictures, suggesting that the focus will be on the acting. It's a sure bet that Robinette, Shraf, and Twyford will be up to the task. 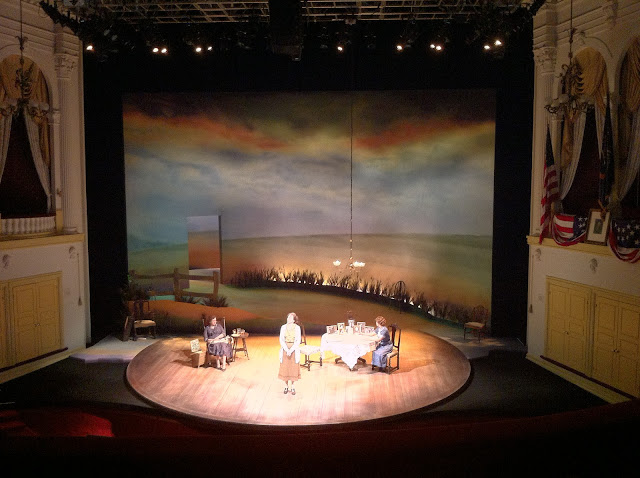