The National Theatre of Scotland is touring America with its acclaimed production of Black Watch. Right now it is at the Shakespeare Theatre, where you need to find yourself on an evening before February 6. It’s a production that makes you remember all the reasons why we go to the theatre. The imagination displayed by playwright Gregory Burke, director John Tiffany and the cast is inspirational. In some ways I find it indescribable – you just need to go see it for yourself.

Sidney Harman Hall is converted into a sort of runway staging for this production, with audience members separated by a stretch of stage. As you enter, bagpipes blare and the Scottish flag is projected across the space. As curtain time nears, an announcer comes over the loudspeaker to tell us of the impending play. Any moment the “gates will be thrown open” by the members of the Black Watch. It is akin to the announcements that occur before a sporting match, designed to rile up the crowd with enthusiasm. As things reach a fever pitch, the sound drops out and Cammy anticlimactically peeks quietly out onstage and softly greets us. In the first few seconds, this production has proved it is capable of doing drastically different things, and indeed throughout it balances high energy with quiet pathos. 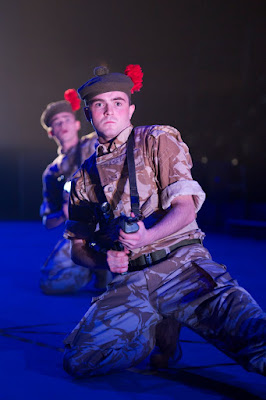 Scott Fletcher as Kenzie and Jamie Quinn as Fraz in the National Theatre of Scotland’s production of Black Watch. Photo by Manuel Harlan.

The Black Watch is Scotland’s oldest Highland regiment. They were sent into Iraq, and this play is devised from interviews with soldiers that served in that war. It is nonlinear and each scene moves seamlessly into the next.

The ensemble works and moves as one, each member as talented as the next. These men are as equally successful at swaggering with the hyper-masculinity of a military man as they are performing balletlike fight choreography. They are as capable of crassly speaking about cocks and cunts as they are dancing. They bellow, they run, they crack jokes, they sing, they move with grace, they speak with silence.

They are a tightly interconnected group, which makes it even more impressive that on Press Night the lead character, if there is one, was played by an understudy, Paul Tinto. The audience didn’t know, and we couldn’t tell. Tinto didn’t miss a beat, especially in a remarkable sequence where his character, Cammy, takes us through the history of the Black Watch, from 1745 to the present. As he monologues, the other members of the ensemble pick him up and flip him around, changing his costume as he demonstrated the various uniforms that have been worn by the Black Watch throughout time. 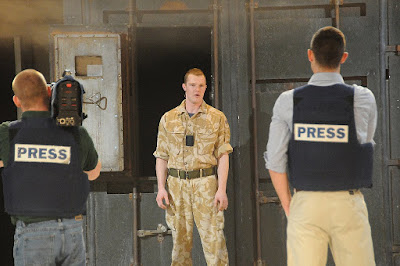 Also deserving of special note is Paul Higgins, who plays an authoritative Sergeant and the mousy, out-of-his-comfort-zone Writer. Higgins manages the neat trick of actually looking physically larger in the first role than he does in the second.

These actors bring every tool to the table, and this is a production that is not bound by any definition of what a play should be. There are scenes, there are songs, there is dance, there is multimedia. Every moment is arresting. There were times where I desperately wanted to write notes about what was happening but could not bear to tear my eyes away from the stage. The final moments of the play are simply astounding.

Black Watch is everything theatre is supposed to be.