Such sweet sorrow.Romeo and Juliet. RSC. Stratford upon Avon. May 2010. 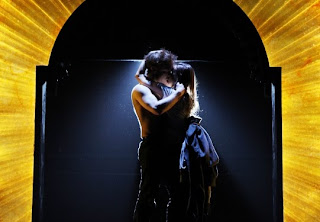 I have said before in these theatrical dispatches that Romeo and Juliet is one of those plays which doesn’t really work for me. Too many whiny teenagers moaning and being just faintly ridiculous. I want to be convinced, desperately but usually come away with a faint sense of dissatisfaction.

So as I settled into the familiar red seats of the Courtyard theatre I wanted, wanted very much to enjoy this production. I had heard good things largely and with the presence of Sam Troughton and Mariah Gale (both of whom impressed me in other productions) in the eponymous roles I had high hopes.

The stage felt like being in a large Cathedral and as the play opened, in wanders our Romeo in modern clothes, camera at the ready snapping the audience. He puts on a set of earphones and struggling to get the right language on his tape, finally gets the English version which starts with the familiar ‘two household both alike in dignity’. He continues photographing then wanders off stage which is suddenly overrun by sixteenth century attired fellows, darkly dressed. Flames swiftly belch up through the centre of the stage and we are in an older world, of feud and feudal honour.

This production is fast paced, boiling over with tensions and violence. Tybalt makes to torch the streets of Verona and any Montagues who get in his way. Through it all Romeo is bemused, stunned by the violence he does not understand. Troughton was believable in his passion, portraying the young Romeo with an intensity born of joy and despair. Mariah Gale was a fresh but feisty Juliet and their s 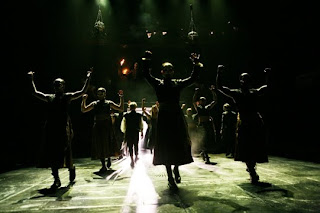 parky love-match was utterly compelling. Embracing before the intermission they were lit in gold and indigo, a kind of living icon to love showing the possibility of redemption through these two – heightening the tragic outcome all the more.

The rest of the ensemble was very strong, with the yummy Jonjo O’Neil being a particularly memorable Mercutio. Misogynistic, sexist and lewd yes –but believable as the quixotic, manic Mercutio.

The second half had a different tone to it as Sam Troughton was sadly indisposed (he had been sounding rather hoarse) and his understudy (young Dyfan Dwyfor ) stepped up to the mark. More subdued than Troughton the play continued with intensity and believable passion.

As the young couples tragedy draws to a close the surviving Montagues and Capulets all appear in modern dress; a terrible beauty has been born. Only Friar Lawrence has been left in his traditional garb (Played with usual brilliance by Forbes Masson, RSC stalwart.)


So was I convinced? Hesitantly, uncertainly. Yes. Yes I was.