From distant lands I first heard of this production –the call came across the Atlantic and like the lunatic Shakespeare fiend I am I found the website and booked the tickets. 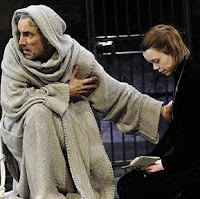 Of course it had lot to recommend it before I got that far. The ever reliable Rory Kinnear who pulled off Middleton’s The Revenger's Tragedy with such notable aplomb at the National, and Anna Maxwell Martin redoubtable actress of stage and screen.

Measure is one of those strange emergent beasts of a Shakespeare play, constantly shifting and changing, emerging through fogs of discourse, academic theory, and directorial viewpoint. It has so many unanswered questions- motivation being a chief one. Only really Angelo has any clear reasons for his actions-and of course being what amounts to the villain of the piece one does not always feel much for the devil-in-disguise; and that was o

ne of the production’s master strokes. Kinnear was terrific as Angelo, somehow

in his sweaty agitation, putting in contacts and taking off his glasses to impress Isabella, there was just a dash of sympathy for him. Just enough to add an almost tragic dimension. At the end of the play there was a sense that in another scenario Isabella and Angelo were perfect for each other. Something she too seemed to sense.


Maxwell-Martin too was tremendous as Isabella – she who can either be unconvincing or cold enough to put a frost on the audience, in this production was resolute, fervent, zealous. There was something very sensual in her vow to not submit to Angelo. The thwarted seduction scene was electrifying.

The rest of the dingy world of Vienna was suitably grubby and seedy, filled with questionable types fuelled only by self interest. The Duke(played by Ben Miles) himself was still open to debate; what was he up to? There were no clear answers in this production, but his obvious love for Isabella appeared early on. Her distaste at the idea at the end of the play was tangible and all the characters seemed aghast at the state of Vienna. Stunned silence filled the darkening stage.

This was a play both brutal and magnificent, marked by forceful and compelling performances.