Skip to main content
Labels
Posted by Rudesby May 11, 2020

While theatres are closed, many theatre companies have put new and old shows online, even while figuring out new ways to produce for now and make plans for later days when they can reopen their doors. With this and more in mind, we'll be occasionally reviewing some of these options here.


Simon Godwin, whose first season as Artistic Director of the Shakespeare Theatre Company here in DC was so recently cut short, has directed one such production now available through the National Theatre at Home initiative. The production, originally staged in 2018 and filmed during that run for NTLive (the National Theatre's series of live theatrical film screenings), is now available for just one week, from May 7 at 2pm EST through May 14 at 2pm on YouTube. 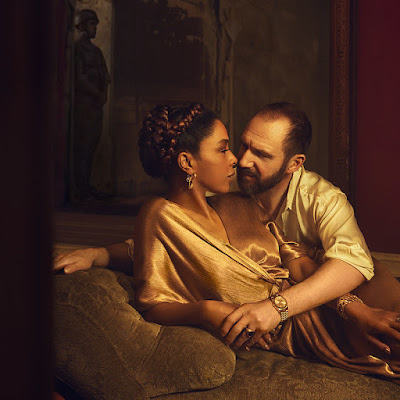 The production stars Ralph Fiennes and Sophie Okonedo as Shakespeare's most dramatic and self-dramatizing lovers, playing out their doomed romance as their respective political ties tear them first apart and then into pieces.  Filling the massive Olivier Theatre with a performance can be daunting, but Okonedo and Fiennes rise to the challenge with swagger and expertly tuned pathos. Fiennes in particular is arresting as he portrays Antony's discomfort and slow breakdown over time, while Okonedo captures Cleopatra's ever-shifting quickness with deft grace.  Also notable in the large cast is Tim McMullan's watchful Enobarbus and Fisayo Akinade's Eros, who navigates the complexity of his role in service to Antony with great skill.

This Antony and Cleopatra doesn't stint in its use of the resources of the National Theatre's largest stage--live musicians accompany the performance, and the revolve is in constant use, first flipping us back and forth between the two sides of Rome and Egypt before opening up to even more sets as the evening progresses. It's perhaps the fault of the production, as its own grandeur necessitates a slower pace, particularly in the latter end of the play when scenes need to shift with lightning speed. It's all well and good to preserve the full text with minimal cuts, but Shakespeare didn't write for stages that necessitated constant scenery changes, and the driving energy of the text gets slowed down. The time that Godwin gives to Fiennes and Okonedo to play their death scenes is necessary, but the pacing leading up to it doesn't connect, at least on film.

This Antony and Cleopatra is an unexpected chance to see the work of a newly local director on other stages, and certainly a wonderful opportunity to see excellent performances (not to mention some very good work from costume designer Evie Gurney). For those looking to try and get a better understanding of what Godwin can bring to STC, it's an absolute gift of an opportunity while our own theatres stay dark--the ghost lights may be all that's on across the world, but thanks to the National Theatre, the house is yours.