In the medieval morality play The Summoning of Everyman, European Christians were presented with the story of a man at the end of his days, trying to find a companion to help him make a reckoning of his life before God. All earthly connections and powers fail him, with the lone exception of Good Deeds, who first has to be strengthened by confession and a good old-fashioned scourging, before Everyman is able to be taken by Death and welcomed into heaven. The message is clear: keep on the good side of the church, do good things, and remember that nothing else matters in the end. It's a bleak outlook in a lot of ways, but then, it does have the shine of an actual, guaranteed happy ending (so long as you follow the rules).

For Branden Jacobs-Jenkins, the playwright of Everybody, that straightforward path to a post-mortem victory isn't so obvious. We retain the same fears and anxieties about life and death, but the answers aren't necessarily clearcut for all that the questions still feel universal. Under Will Davis' direction, and following Jacobs-Jenkins's device, the part of Everybody can fall to one of five very different actors at every performance: Alina Collins Maldonado, Avi Roque, Kelli Simpkins, Ayana Workman, and Elan Zafir, each assigned their nightly roles by lottery (in addition to Everybody, the other variable roles are Friendship, Cousin, Kinship, and Stuff, thus creating over 100 possible combinations of casting).  The actors vary widely in physical type, age, race, and gender, but imagining each actor in the role of Everybody adds a profound layer to the experience of seeing even one permutation. Instead of a white male Everyman, Everybody might be a person of color, a woman or nonbinary person, and no matter who winds up in the role, the audience is presented with one specific actor charged with embodying the universal experience of humanity from the powerful circumstances of their own specificity. On Monday night, Roque's Everybody was a warm and powerful center of the evening, counterbalanced beautifully by Nancy Robinette's Death (seriously, when I die, can she be the one to shepherd me wherever it is I'm supposed to go next?) and with the magnetic Yonatan Gebeyehu delivering rich performances in several roles. 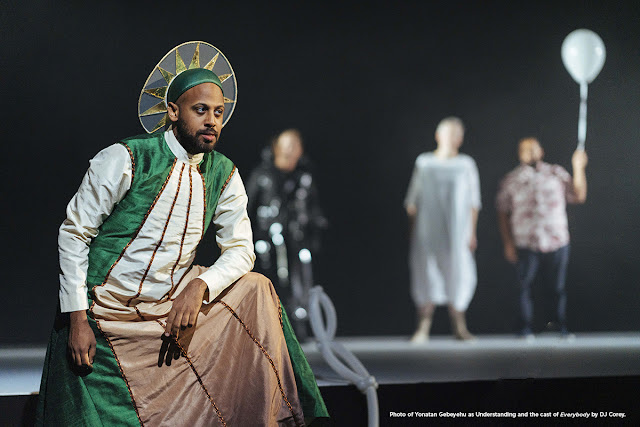 The production is supported by a deceptively simple set design by Arnulfo Maldonado and gorgeous lighting design by Barbara Samuels. Melissa Ng's costumes get to inhabit the spectrum from street clothes to contemporary spins on robes fit for a real medieval morality play.

Jacobs-Jenkins's play makes a lot of fascinating changes to the source text. Here, no one offers Everbody a clear answer on what comes after Death takes them away, and I'm always down for a good danse macabre (y'all, the middle ages were WILD), but others are less effective. The playwright uses a quasi-frame around Everybody, a combination of Everybody recounting their encounter with Death peppered with a fractious and charged conversation with their friends; while the glimpse into Everybody's mind through soliloquy is welcome, the rest feels like a digression that saps some of the focus of the evening. Ultimately, Davis's direction keeps the audience engaged, taking the time with the humor of the play as much as with the pathos. Everybody doesn't ask new questions because when it comes to death, we've always known the questions and, to be honest, a lot of the answers. No one is really surprised to find that people and things can't go with Everybody beyond the moment of Death, after all. But Everybody is a hell of a modern memento mori, and not a bad way to usher in a new artistic director at STC with Simon Godwin: an adaptation that's rooted in the classics, looking out directly into the audiences today, and from a playwright we'll be hearing about for quite some time into the future.
Email Post
Labels: rudesby Shakespeare Theatre Company