There comes a moment when every theatre critic has to wonder if they have unwittingly cultivated untold powers, transforming words into reality. Or maybe that's just me. In any case, when I saw Alan Paul's fantastic production of Kiss Me, Kate at the Shakespeare Theatre Center back in November of 2015, I wrote these very words describing the rapture I felt watching Robyn Hurder's Bianca stop the show with "Tom, Dick, or Harry":

I couldn't stop myself from laughing in absolute delight (and I wasn't the only one- the audience around me was just as audibly charmed), and by intermission, was already planning how to incorporate tap into ALL Shakespeare (ask me about my plans for tap and King Lear!)

Smash cut to October 2018 and Alan Paul's production of Shakespeare's The Comedy of Errors for the Shakespeare Theatre Company, and the show begins with a rousing song and dance number composed by Michael Dansicker and choreographed by Karma Camp. Have my dreams been realized? And, more to the point, is that a good thing? 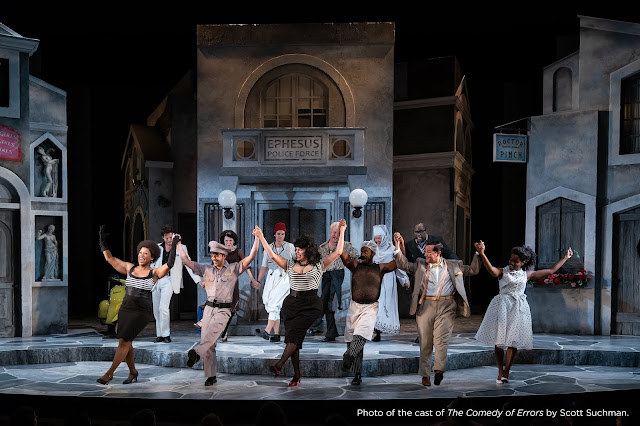 Paul's production is heaps of fun, a romp that transports Shakespeare (by way of Plautus) right into the logic and rules of a Bugs Bunny cartoon. There are comedy parrots, songs and dance, slamming doors, and pantomime dame-level drag characters. It's also a production trying to straddle two different approaches to the material- one transformative (let's make it a musical!) and one that just wants to let really, really talented actors have a go at the material.

And by heaven, what a cast.  Shakespeare wrote for a company of actors whose strengths he knew inside and out, and Paul is able to cast a slew of veteran STC actors (along with a few notable newcomers) and let them do what they are so very good at- Veanne Cox is a dream, Gregory Wooddell has never met a comic hero he can't sink his teeth into, Nancy Robinette and Ted van Griethuysen can instantly embue two characters we see for a combined ten minutes with depth, nuance, and humanity. Carson Elrod and Carter Gill make great work of the two Dromios, and Sarah Marshall is an unforgettable Dr. Pinch. 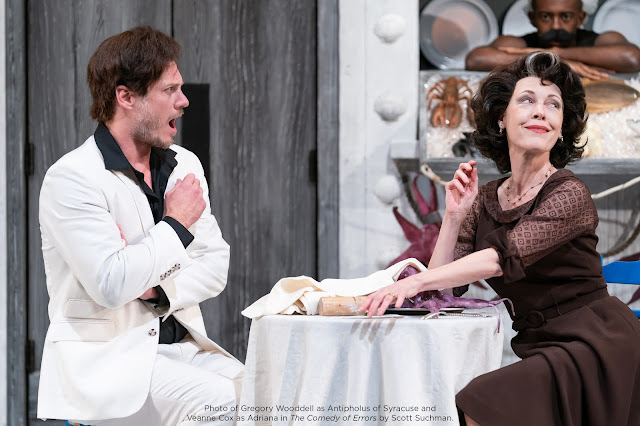 As a trio that plays a bevy of background characters, the aptly named Proteans are played by Matt Bauman, John Cardenas, and Justin G. Nelson, and their sudden unexpected turn in the spotlight was a huge crowdpleaser.

When I see productions of Shakespeare that exist with a compulsion to be something other than the text itself, I always wonder what might have been if the director had chosen to let the play be the play. There are so many excellent qualities of this production that I think it would have been a damn fine Comedy of  Errors sans the extra trappings.  But what we have is something different, The Comedy of Errors--and Friends!.  At the end of the day, the final question is, did the director succeed at delivering the production that they wanted? I don't have a window into Paul's mind, but I'm reasonably sure that the answer is Yes, and taken as it stands, it's a night of theatre with a good number of laughs in a time when most friends I know in DC could use just that.