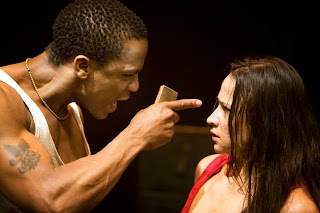 Mies Julie is director Yael Farber’s contemporary South African adaptation of Strindberg’s 1888 play, Miss Julie.  Throughout the course of the ninety-minute show, we follow Miss Julie, the daughter of a wealthy landowner, and John, her Xhosa servant, as they seduce and battle each other.  We watch the micro and micro-shifts of emotion (passion, distrust, anger, despair) that they go through in the course of one drunken evening where both their long-standing attraction to each other and their individual frustrations at the constraints of their lives bubble over and they finally take action.

As audience members were leaving this production of Mies Julie, they were invited to leave their thoughts about the show on a cork board in the lobby.  Pencils were provided, along with little slips of paper with short writing prompts like “What did you leave the show thinking about?”

As much as I have been reflecting on the play since seeing it, I have also been spinning on some of the audience responses on that board - two clusters in particular. A number of comments were along the lines of “Great acting! Wonderful production!” and several others expressed some variation of “We’ve come such a long way.”

I realize that it is hard to fully synthesize an emotional/intellectual response to a play in the five minutes that you are walking out the door, much less articulate and write out that response on a small notecard, but I do think that maybe these gut reactions tell us something about the production. Namely, did the extreme close-up focus on the emotions and sexual dynamics of the two main characters block larger social-cultural-historical themes from coming through?

The play is supposed to be set eighteen years post-apartheid, meaning approximately 2008-2009.  The audience responses that ‘we’ve come such a long way’ seem to indicate that they thought the play was set in a more distant past.  Instead of wrestling with the idea that South Africans are still trying to untangle the ramifications of apartheid, audience members get to erroneously think, “phew, glad that all that bad stuff the play is about is long gone.”

I’m also curious about the “Great acting!” responses.  If you leave a show thinking that the acting was great, does that mean the ‘acting’ was too visible?  Did the display of the actors’ technique get in the way of the story? (And, if so, does it matter?)

Or, is “Great Acting!” the only comment that people feel comfortable making when confronted with a politically and emotionally charged story from and about another culture?

For me, the two most striking parts of the production actually had nothing to do with John and Julie.  The first was the long rack of multiple pairs of muddy boots in the background of the set.  These were in contrast to the singular pair of the master’s boots that John vigorously scrubs throughout the play and represented all of the other unseen, uncared-for workers.

The other memorable element was John’s mother's monologue about going to vote for the first time and discovering her fingerprints have rubbed off from years of scrubbing floors.  Her servitude has literally erased her identity and her chance of participating in the democratic future of her country.

These two images, for me, more succinctly sum up the disparity and the heartbreak of a broken society than all of John and Julie's raging.