When proudly declaring my love for The Winter’s Tale, people often greet me with looks of mistrust or confusion. Clearly  this is some form of Shakespearean Hipsterness –trying to be too cool for my own good, my geekish love of this late play the theatrical equivalent of preferring The Life Aquatic to The Royal Tenenbaums.  Before seeing this production, one of my theatre fellows described the synopsis he had read: ‘dense language, complex plot structure, amalgam of theatre genres’. Which, technically, is true; but something to be cherished in this play is the core notion of redemption, resurrection, paradise regained. It’s a beautiful idea. One I am always keen to see played out. 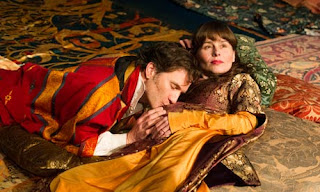 The play opened with the sounds of a gently babbling Mediterranean alongside a visually projected ocean, azure blue and boldly dreaming. Littered across the stage a selection of courtly Sicilian aesthetes lounging decadently, sleeping, smoking from hookahs- a delectable mix of plush velvets and light, bright silks. Tara Fitzgerald as the heavily pregnant Hermione brought a sense of delight to the part which was refreshing to see, whilst Jo Stone-Fewings’ Leontes was a believably passionate man. Quickly brought into the psychosis of intense jealously he was overcome with strong, irrational feeling.

Often a Director finds the mix of tragic elements and later comedy rather difficult to pull off –generally one section has more impact than another. Here the first acts of mounting tragedy were adeptly presented with a particularly hair-raising trial scene (at one point Hermione is about to submit to the Executioner’s axe – cue screaming, lamentation, fear and protestation! To which she suddenly calls a halt calling upon the oracle).  The action built as gradually the characters moved to a central platform raised as a dais above the stage as simultaneously the weather changes – our azure sea turns gray then black with menace. This reaches a pinnacle as the raised platform rises even further into a giant metal turret atop which the grief stricken Leontes tears his clothes and pulls his hair.

Edge of the seat stuff then – but what for the change? Well as one wise man once sensibly said it’s the bear that sets the mood change. One death too many pushes across into comedy. The bear always causes a stir (if for no other reason than being the most famous stage direction in Shakespeare) and there is always a sense of expectation before his appearance. I am always tempted to cheer. Here the bear was a polar creature in projection, bounding through the sea towards it’s hapless victim (the quietly heroic Antigonus played with recognizable humanity by Duncan Wisbey) which honestly was rather disappointing. In trying to make it too serious, too scary it came across as a bit limp.
One or two other interesting choices came in textual cuts , ditching quite a lot of Paulina’s (Rakie Ayola) wonderful speech to Leontes which meant something of less conviction in her ‘control’ over the grieving Lord. One of a few minor misgivings this reviewer had about the production. At times it seemed visual style had taken precedence over theatrical substance.

The second, lighter section of the play was also marked by some signs of darkness (good old Bailey). The coastal region was dominated by a dirty, oxidised metal tower, oily and offensive. Even Florizel's ( A tousled haired Gavin Fowler) fight with his father was more serious, more violent and vicious than I have seen before. Perdita (a spirited Emma Noakes) as shepherdess seemed almost to be crushed by the combat, wailing and pulling hair much like the last image of her distraught father. Of course, all of this was after a (perhaps overlong) interlude of men in velvet pantaloons drinking and cheering, leaping and generally getting bit silly. A touch too much carousing for my taste.

For priceless comedy moments however, special mention must go to Pearce Quiqley (Memorably seen in Shrew at the Globe last season) as Autolycus, a character that sometimes comes across as utterly revolting. Morally corrupt maybe, but thoroughly good fun to watch Quigley had a down played northern monotonous tone that made his gentlemanly gesturing  and terse delivery a comedic joy.


As Bailey bought all the action back together the elements of comedy and tragedy reached their inevitable redemptive conclusion with the reuniting of Perdita and family   scratching back from the darkness a sense of optimism. Fitzgerald was, as always, excellent as Hermione- a passionate woman full of feeling and we all left the theatre with just enough hope restored in humanity.