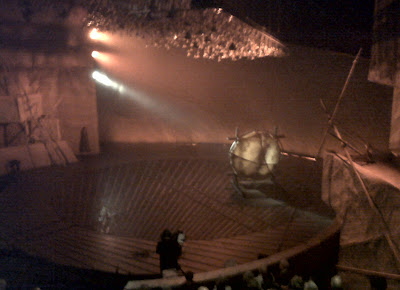 A resounding rhythmic heartbeat resonates round the empty chamber of the stage as our eyes focus on the pulsing and wombing sphere stage left. Above, from the flies, flickers a myriad of bulbs clustered together in a helix of light. Gradually from within the circle something begins to stir.

Welcome to Boyle’s vision of Frankenstein.

Despite monumental interest on my part in getting to London to see this production, it just didn’t happen so with great delight I was able to see it, thanks the brilliant NT Live programme.

Frankenstein is one of my favourite novels and I always read it with such pathos for the tragic dimension of Shelley’s unnamed, unloved creature. Combining this with the appeal of the splendid Benedict Cumberbatch and the Directorial vision of Danny Boyle –A director who in his films is able to create something glorious from dirt and despair – this was a production with hype to live up to; and seeing it after it garnered with a festoon of awards it seemed like I was in for a good evening. 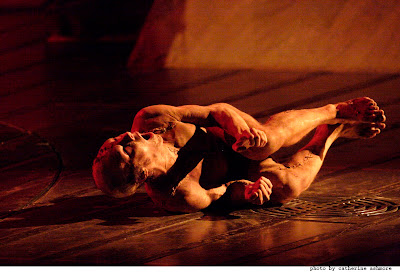 With the birth of the creature – a fragile grotesque – this vision of the Frankenstein world was which exuded sympathy for the creature. Cumberbatch’s performance was a master class in acting, each muscular tic and flail through convincing us of this monstrous toddler. We watched as he tried to find his voice and danced in simple, heavy footed joy as he saw the sun rise for the first time. His dream of an equally hideous wife was balletic and desperately touching, whilst his growing confidence in the elderly, blind man was matched only by his growing conviction of ultimate rejection. 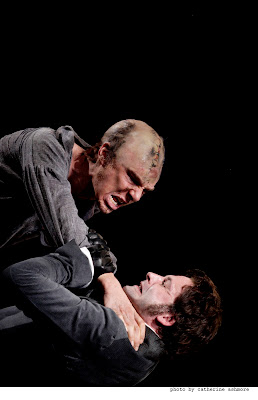 Often his bursts of rage –and these there were – were like that of a damaged child, later a damaged adolescent as he constantly acted out at those that rejected him. Watching his mixture of fury and sadness as Victor continues to berate him with terms of worthlessness was piquantly painful, matched only by the creature’s own self revulsion at the terrible crimes he committed.

Johnny Lee Miller had the thankless task of being the generally pretty awful Victor. He was convincing in the role but was perhaps a touch dry. I noted –with a tiny dash of disappointment –that many of the scenes where Cumberbatch’s creature was absent were a little flat. It was as if he had been cast as the anti-hero, and we wanted him to return. 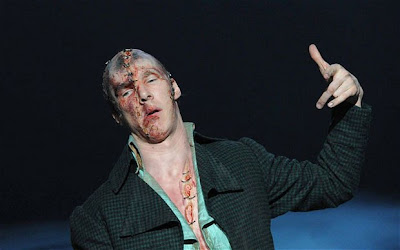 However Miller finally started to steal a scene right at the final moments of the production, when he descants upon his own lack of humanity. Perhaps this was what his dry presentation had been about all along? It was a tad disconcerting to have the most fallibly human character, the monster.

The staging was visually striking with a blasting steam punk steam train bursting onto stage to demonstrate the brutalised world of industrialized humanity, whilst later it became a white echo chamber of mountain caverns. Visually striking and resplendent with a soundtrack akin to an alt-punk German electro scene, the production packed quite a punch. 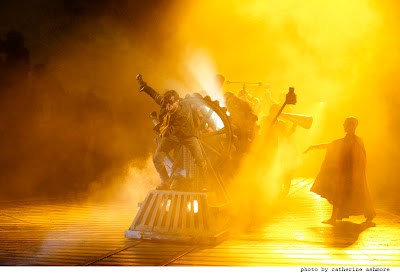 As the creature and his dehumanised creator trudge off at the end of the play ,their purpose now being only mutual destruction as mutual love is out of the question, we are left with a buffet of moral questions about science, humanity, inhumanity and responsibility. Perhaps these were best encapsulated in one searing image of the dénouement; the two characters stretching across to each other like Michelangelo’s God and Adam, ready to touch fingertips, with the hard-hearted Victor pulling away from his creation.

‘All I wanted was to be loved’ he says mournfully; an idea that resonated within the play world and the audience.