How on earth can you tell the story of Oedipus in the modern day? We're not talking a modern-dress version of Sophocles, mind you- that's easy peasy and has been done many, many times. No, what Steven Berkoff's version of the Oedipus legend sets out to do is to actually create a version of the story in the modern day. Or, sort of the modern day- Berkoff wrote the play in 1980, and it's his version of London's East End, seen through the lens of white makeup, black costumes, and decaying tile walls, that we see in Robert McNamara's production of "Greek" at Scene Theatre. 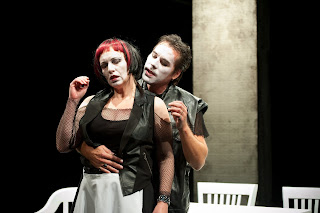 One of the reasons why the great stories stay with us for millenia is that we never stop seeing reflections of ourselves within them. The story should ring as true in 1980 as it did two thousand years ago for the Athenians seeing a new stage version of a tale that was old even then. That being said, it should work to put Oedipus in the East End, rechristen him "Eddy," and see what happens, right? Does it follow that a play that teems with the East End of 1980 will likewise translate for audiences in Washington DC in 2011?

These are a lot of questions to hang on one play, but you can't deny that Berkoff engages them head-on, and that McNamara works hard to give audiences a production that offers its own argument. His cast does excellent work with a fiendishly difficult text- the ladies in particular. Nanna Invargsson and Danielle Davy are each mesmerizing in their own ways; Berkoff's script is rife with monologues that require herculean strength and command of phrasing from the actor, and both women offer up showstoppers by the end of the night. Eric Lucas has the heaviest burden as Eddy, and isn't quite able to shoulder it as effortlessly as the women, but I think his performance is likely to settle in and become more assured as the run progresses. 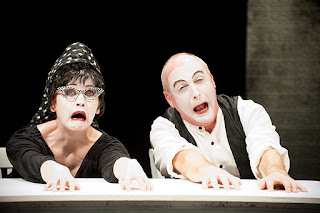 I just wish I were more enamored of the play itself. My problem isn't with the constant sexual and scatalogical language and imagery (although, really, please be aware- this show is filthy), although I can't help but feel that its overall effect seems more immature than daring, despite Berkoff's probable intentions. No, my problem is that Berkoff missed the point of the Oedipus story, or perhaps the point behind the story. "Oedipus" focuses on the fateful two hours when a man's desire to save his city brought his personal world crashing down around him. "Greek" spends two hours telling the back story to that terrible moment. Sophocles knew that the back story was ridiculous and improbable and entirely beside the point; by focusing on the other 95% of Eddy's life to date, Berkoff seems waylaid by the more salacious story, the one that will let him revel in naughty words to his heart's content.

I don't like giving away the ending, even with a show like "Greek" that relies on our familiarity with its story. That being said, the most truly interesting and exciting moment of the entire show is in Eddy's final monologue that crashes into the blackout. I don't want to dwell too much on something I won't describe, but for me, that moment was the best in the entire evening. I'm just not sure how much I can recommend a show on the strength of its last ten minutes. It may that "Greek" just wasn't the show for me- and that's fine! Not every show can be. There's some good work being done here, but you can see that I take some umbrage with the play itself, which makes it hard to see through to the strengths of this production.

For those who see the play, let us know what you think. It's been too long since we've had a good dialogue in the comments, so chime in and have a party, commentariat!
Email Post
Labels: No Capslock scena theatre