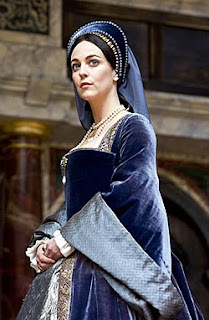 A shocking lack of reports from the nook-shotten Isle of Albion of late, for which I can only make grovelling apologies. Summer’s lease was indeed all too short a date and so the theatrical highlights have come and gone, and now these tomes must be recorded before racking up my next Hamlet. (Rory Kinnear at The National; very excited about that. Kinnear = Genius)

Anyway, back to the long days of summer. To be honest they were largely marked by incessant rain, iron-grey skies and stifling heat. So what theatrical jewels were there?

First let me cast my mind back to the nearest I got to reliving the joys of the RSC Histories with a little extreme history at The Globe at the start of August. On this occasion there was a little sunshine, and rather excitingly I got to cross off another play from The Complete Works (35 Shakespeare plays ; Check; Only 2 more to see) Yes, a rare performance of the co-authored Henry VIII – Also known as All is True. Perhaps most famous for being the play that burnt down the first Globe (One would suspect that someone would have questioned the idea of setting off a canon in a thatched building.) Anyway issues with history aside, one can see why Henry VIII is rarely performed. Stitched together there are some fantastic moments – The Duke of Buckingham’s stirring farewell to the crowds (pleasingly played by the fetchingly bearded Antony Howell – ah. A Household favourite.) and of course the glorious moments of Tudor propaganda. The Princess Elizabeth’s christening sequence swathed the stage in golds, silks and pearls whilst proclaiming ;
“This royal infant--heaven still move about her!--
Though in her cradle, yet now promises
Upon this land a thousand thousand blessings,
Which time shall bring to ripeness:”
Subtle it may not be, but it does make for some choral drenched drama. Miranda Raison - both fragile and feisty- played Anne Boleyn with an amusing amount of knowing political nous, whilst Dominic Rowan (again displaying a fetchingly Renaissance bit of beardage) made a pretty decent Henry. However as with Henry VI -where our apparently eponymous hero doesn’t appear for ages- Henry VIII gets demonstrably little stage time.
Despite some strong performances, the weaknesses in the play’s structure showed and one can see why in the hands of less professional company it could be a bit of a train wreck. 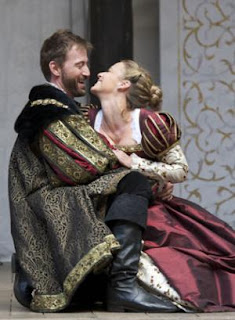 So what else in the weekend of extreme history? (Ah how I long for the old days of the RSC...) Anyway, a modern work entitled Anne Boleyn made a comparison piece with darling William’s Henry VIII. In Breton’s play Anne was a determined, politicized, quasi-religious martyr whose figure appeared to haunt (more metaphorically than literally) the writing of the King James Bible – a section of the play characterized by political machinations of the Church Leaders and the increasingly bizarre shenanigans of the Tourettes ridden Jacobus (whose penchant for parading about in dresses was dutifully ignored by the sycophantic courtiers) It was an interesting couple of hours; and on the upside the Lovely Anthony Howell appeared again as Henry this time.

Not all the extreme history time was spent at the Globe of course. On Friday my pal and I bundled across to The National where we saw Danton’s Death- in a translation by Howard Breton. In this case the chief draw was – look I could pretend I find the French Revolution fascinating, which it is by the way, but I was brought up to be honest – Toby Stephens. 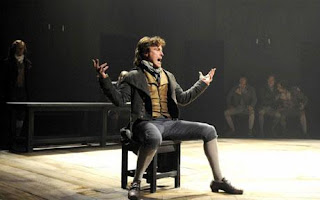 So what of it? It was rather lavishly drawn, with an epic sweep to the blue and grey stage (in the monster that is the Olivier Theatre) Stephens’ swaggered and sneered his way through much of the play, to be honest being a frankly unsympathetic character- I didn’t feel the emotional punch I thought I would as he was led off to his demise . That being said it was a spectacular finish –I am still unsure how they did the guillotining stuff.

Back to the Globe on Sunday, and I met up with a dear traveller from an antique land and it was to the occasionally fetid, often epic world of Henry IV. These two parts were the highlight of the weekend, treated as I was to perhaps the BEST Falstaff I have ever seen. Roger Allam played him to perfection – a force o 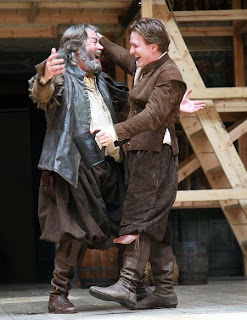 f nature whilst being somehow malignant, universal and specific. At one point he and Hal treated us groundlings to some rock Renaissance guitar, milking the audience reaction taht would have made a stadium-rock-band proud. In his increasingly apparent dotage, he still managed to lech convincingly after Doll Tearsheet (the line ‘come here and sit on my knee’ has never made me cringe that much before) but his eventual rejection by the calculatingly callous Hal was tragic. Throughout their interaction, we knew Falstaff loved Hal. Hal, it was pretty clear couldn’t care less about anyone except himself. Even when the ailing King was on his death bed, Hal seemed more concerned about how this would all affect him. Playing Hal as a bit of an egocentric spoilt brat, Jamie Parker was an interesting foil to the grubby earthiness of Falstaff. The curly coiffured Sam Crane made a suitably fevered Hotspur, and (as all Hotspur’s should be) a bit of a treat for the ladies. It was one of a set of charismatic performances. Delicious stuff.

Whilst not being the RSC Histories, it was a weekend of time travel and with an outstanding Falstaff under the belt we all retired to a local hostelry for some gin and ale. It may not have been Eastcheap, or The Boar’s Head, but under the late August sky it was close enough.
Email Post
Labels: England jules