The Shakespeare Theatre has mounted a solid production of Bernard Shaw’s Mrs. Warren’s Profession, under the direction of Keith Baxter. Shaw, in lesser hands, can be rather stolid and preachy, but this production, despite a few flaws, keeps the pace moving and the audience entertained.

Mrs. Warren is an unmarried businesswoman, lively and wealthy. She has used her wealth to bring up her daughter, Vivie Warren, in the best of circumstances and educations. Vivie is bright and upstanding, but rather naïve. During the course of the play, Vivie is horrified to learn the true nature of her mother’s profession, and the source of the money that has kept her dressed and fed. For Mrs. Warren’s profession is that of a prostitute. By the time the play takes place, she is the successful madam of a string of brothels. Shaw leaves us wondering whether we should admire Mrs. Warren’s achievement and independence or rage over a society where the most profitable option for a woman is to sell her body, or perhaps both.

Baxter takes some liberties with the text in this production. He throws in a couple musical numbers to give us a glimpse of Mrs. Wareren’s younger days, as a singer in a music hall. He adds a rainstorm at the end of the play in order to give Vivie a moment of tenderness. He also gives the play a sadder ending than perhaps Shaw intended. At the end of the play Vivie rejects her mother, her way of life, and her money, and she sets off to make her own way through hard work. Shaw suggests in his script that hard work is the thing that brings Vivie contentment and even joy. His ending is more positive in that you feel it will be possible for Vivie to find a different way of getting through life than her mother. The tone of Baxter’s ending is much more one of pity – we feel sorry for Vivie, she seems to be all alone, and there is doubt as to whether the path she has chosen can bring her happiness.

One of Baxter’s liberties I do find to be a major misstep. In Shaw’s text, what Mrs. Warren is and does is never expressly stated. It is very clearly hinted at, and not at all hard to figure out, but the word is never said aloud. This is for a reason. Shaw’s point is that prostitution was/is incredibly prevalent but no one would talk about it. You can’t solve a societal problem if no one speaks about it. And even though the entire play is about it, no one ever says it. Baxter chooses to have one of the characters stage whisper it to another, which goes against what Shaw was doing, and also unfortunately turns a rather serious moment into a somewhat comic one. 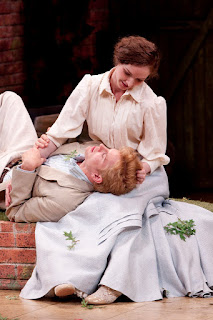 Tony Roach as Frank Gardner and Amanda Quaid as Vivie Warren in the Shakespeare Theatre Company’s production of Mrs. Warren’s Profession, directed by Keith Baxter. Photo by Scott Suchman.
The Shakespeare Theatre has assembled a strong cast in the supporting “glory” roles. Ted van Griethuysen is the sprightly architect Mr. Praed. Praed “was born a boy” and Greithuysen plays that quality perfectly, always ready with a grin, light on his toes, with impish charm. Tony Roach plays Frank Gardner, Vivie’s love interest, with a silly sugar charm. And Elizabeth Ashley struts across the stage, in a brash, unashamed manner as Mrs. Warren. Her voice is husky, her laugh broad, her manner appealing.

But I call these glory roles – roles in which the playwright has done much of the work for you. All the supporting characters in this play Shaw has made eccentric and fun and interesting. Any actor worth his or her salt just has to show up and the audience will love them. But the one role in this play that is not a glory role is thus the role that requires the greatest amount of talent in order to pull it off – that of Vivie Warren (don’t let the title fool you, the play is really about her). Unfortunately, Amanda Quaid doesn’t make us care about Vivie – she plays her at one level, with a slow, careful delivery of every line. Yes, Vivie is steely and resolute, but she’s not without passion. There are things that she cares very deeply about, and Quaid never shows that. Since Vivie is surrounded by “glory” roles, there is a very great danger of her coming across as a wet mop, which is exactly what happens in this production.