I have to admit, Hamlet is a play that is increasingly difficult to review. When you have such a strong familiarity of a work, and have seen it over and over again, it’s very difficult to sit back and see the whole picture, rather than the production as a series of choices made in famous moments. When I see Hamlet nowadays, I find myself spending the whole night thinking, “Okay, that’s what they did with this moment,” “Okay, that’s what they did with that moment.” And pretty much how this blog posting is going to go. The series of choices made by director Joseph Haj and the cast of the production of Hamlet currently running at the Folger Theatre, some of which I liked, others which I did not like.

But with that caveat, let me say that I am able to step back enough to say the greatest strength of this production is its clarity. If you’ve never seen Hamlet, this would be an excellent first exposure.

Hamlets are only as good as, well, Hamlet, and Graham Michael Hamilton is a very credible one. He’s a very emo Hamlet, modern, young, with black skinny jeans, and he plays the melancholy much more than the madness. There are a couple moments he plays very, very well. First of all, I really love the fact that Hamilton finds moments to create a relationship with his Ophelia. The text doesn’t give us a lot to work with (well, nothing, really), and Hamilton overcomes that obstacle and demonstrates Hamlet’s love for Ophelia. He gives you glimpses that let you in on what they were like together before all the shit hit the fan. Unfortunately Hamilton isn’t given any support in this department by his Ophelia, Lindsey Wochley, who gives a rather flat and by-the-numbers performance (though thankfully this is an Ophelia that is pregnant by the time the mad scene comes along – a choice that has always made absolute sense to me, and frankly, isn’t done enough, as evidenced by the fact that so many reviewers were shocked by it).

Hamilton is also the first actor I have ever seen make dramatic sense of the 2nd Quarto placement of the “To Be or Not to Be” speech. (For you non-geeks, there are actually three different texts of the Hamlet play by Shakespeare. The 2nd Quarto is the most commonly performed version, and it places the speech later in the play, after the meeting of the players.) Most people question Hamlet discoursing on suicide right after he’s been ignited by his plan to use the players to test Claudio’s guilt. Hamilton makes it work because he draws the emotion for this speech from what just happened with Ophelia – their breakup, if you will. For Hamilton’s Hamlet, this is one more heartbreaking moment, and too much for a man to bear. 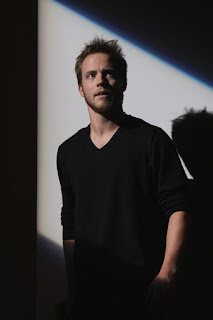 Graham Michael Hamilton as Hamlet at Folger Theatre. Photo by Carol Pratt.
But director Haj ruins a lot of Hamilton’s other moments for me. The play is underscored by Jack Herrick, which is fine. The problem comes when the music swells right before every one of Hamlet’s soliloquies. Add in a light change, and a three second pause, and it’s all a bit too much indicating – “Hey, audience, this is a famous dramatic moment.”

Another one of Haj’s choices I didn’t get – The Mousetrap. It’s all done via voiceover, which nicely allows Gertrude, Claudius, and Old Hamlet (a very fine Todd Scofield) to voice their counterparts, but when The Mousetrap is a recording and animated projections, well, there’s no PLAY in which to catch the conscience of the king.

Haj does bring out some nice work in the ensemble. Stephen Patrick Martin does well as Polonius, and is smart enough not to fall into the trap of playing him as the comic relief. There’s a fun moment where Hamlet actually meets Fortinbras (Dan Crane). It brings a smile to this theatre nerd’s face when a choice like this occurs not with any changing of actual text, but through blocking and an actor’s inflection of a line. Billy Finn (Marcellus), Dan Crane (Bernardo), and Lea Coco (Horatio) are actually frightened by the appearance by the ghost which is an element surprisingly missing from many productions of Hamlet. Coco understands that when Hamlet says, “I think I see my father” and Horatio replies, “Where?” that Horatio is frightened the ghost has reappeared. I’ve seen many Horatio’s deliver that line calmly. Justin Adams’s all-action Laertes serves as an appropriate foil to this Hamlet. 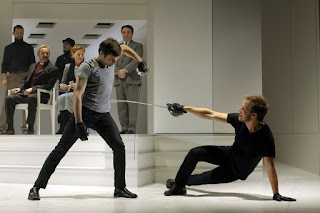 Laertes (Justin Adams) and Hamlet (Graham Michael Hamilton) in an ill-fated duel in the final scene of Hamlet at Folger Theatre. Photo by Carol Pratt.
Much has been said in other reviews about James Kronzer’s stunning all white set. And while I don’t disagree with that assessment, this actually happens to be the biggest problem I have with the production, and indeed with nearly every play I’ve seen at the Folger. I don’t care if you think this particular production was brilliant or awful, the fact remains that it didn’t belong at the Folger. Let me explain. There are many, many theatre companies in the DC Metropolitan Area. There are several Shakespeare companies as well. I am impressed with the fact that most theatre companies in this area have successfully found a way to stand out. Each does something a little bit different. The Folger completely ignores the gold mine it has, the very element that would allow it to stand apart from the other classical companies, and that is The Space. The Elizabethan Theatre. That stage is what makes the Folger different, and that stage is ignored in almost every single production, and most especially in this Hamlet. Kronzer’s set covers up so much of the Folger theatre, it seems to be deliberate ignoring the space in which these actors are performing. So Folger, please take note: your stage is lovely. More than lovely, it is special, something that no other theatre in the area can claim. Please, please, please, start using it. Start respecting it.