Studio Theatre: In the Red and Brown Water

Have you wondered what it is like to watch an actor steal a show? Do you want to know what it looks like to see an actor command a stage? Well, for an answer, head down to Studio Theatre and take in Yaegel T. Welch’s performance as Shango in In the Red and Brown Water. Shango is the epitome of cocksure. The hyper-masculine, too-smooth lover whom our heroine Oya knows in her brain is bad news, but in her body can’t say no to. Welch has this character down. He struts on stage, hand on genitals, oily smile on face. Whenever he purrs out “Shaaaaaango enters” the audience titters in delight.

Let me just bring to your attention the last time Welch was mentioned on this blog. He was part of the superb trio of My Children! My Africa! also at Studio. I said then “Welch imbues Thami with a physicality of youthful awkwardness that we can all recall from our adolescence.” The role of Shango could not be more different. I had to double-check my old program before I would believe that it was truly the same guy. This is an actor! 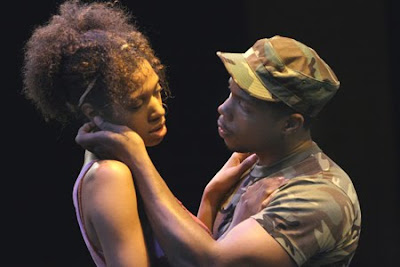 Raushanah Simmons and Yaegel T. Welch in In The Red and Brown Water at The Studio Theatre. Directed by Serge Seiden.
Though Welch manages to steal the show, the production is served by fine acting all around. Raushanah Simmons gives a sensitive portrayal of the strong and yet vulnerable Oya. Oya is a young girl whose running ability affords her the opportunity to go to college. But her mother is ill and she chooses to stay home. Her mother dies and she looses her opportunity. She is then drawn between two men. The desirable, but dangerous Shango, and the safe, but boring Ogun (a solid, real performance by Jahi A. Kearse). Oya’s inability to have a child fills her with a longing that cannot be filled.

Playwright Tarell Alvin McCraney fuses styles to create the tone of In the Red and Brown Water. There is something poetic about the dialogue, something Greek tragic about the structure, something modern and colloquial about the interactions and language. The characters serve as their own narrators, announcing their entrances and exits, and some of their movements and expressions.

McCraney’s voice requires a particular approach and I would have loved to be a part of the rehearsal process that found it. Actors must be able to click immediately back into a scene after clicking out to tell us that “Oya smiles, sadly.” This dialogue must be narrative, yet also reveal character. Apart from the scene, and yet delivered with intention all the same. Welch, Kearse, and Simmons were the best at navigating this terrain, I thought.

I missed The Brothers Size, McCraney’s play that appeared at Studio in 2008, so I was very happy to finally experience this new voice in American theatre.