Perhaps you have noticed in the notes from Albion, the alarming regularity with which I seem to potter along and see Twelfth Night, despite it’s not featuring in my top ten Shakespeare plays. I have as yet only seen one production of it which genuinely moved and delighted me (some 4 years ago-come on theatre lovies!) and perhaps the search to recreate the magic of Boyd’s 2005 production is the reason that I keep heading back to see it.

This time was the turn of the RSC at the Duke of York’s in London . (for thoughts on this particular lush though uncomfortable seated theatre see thoughts on Arcadia from last summer) I was drawn by a recent kindling of interest in all things late regency and the promise that this production would be a Byronic dream of velvets and corsair-camaraderie. Another draw was in its Director; the usually trustworthy Doran, and in some of the cast including the always redoubtable Richard McCabe. 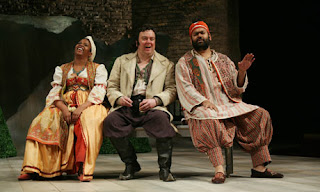 Yes, this was a blossoming production, with delicious staging brimming over with magic carpets (Ok maybe not magic, but you get the impression), twinkling Moroccan lanterns and dusky, dusty costumes.

Whilst splendid to look at however I did not feel particularly moved. Twelfth Night is a play with a mixture of pervasive melancholy alongside its joys, which was something Doran said about it before I went; but sadly I came away with a sense of opportunity missed. 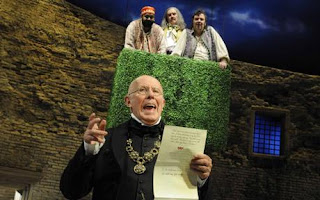 Don’t get me wrong-the box tree scene was delightful, and some performances were charming. I particularly enjoyed James Fleet as an aging, vain and flighty Sir Andrew, dressed in 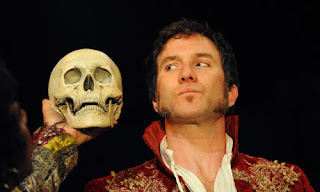 velvets and going about in a sort of machismo daze-if that is possible. Jo Stone-Fewings as Orsino was just the right touch of self-indulgent pomposity and egoism. Richard McCabe was a grubby little Sir Toby (that is a compliment-though he was rather nasty) but I am afraid I found Alexandra Gilbreath as Olivia abrasive.

Richard Wilson was an interesting choice- renowned over this side of the Atlantic for the apotheosis of cantankerousness, the morose and ever loved for no apparent reason Victor Meldrew. Malvolio should have been an acerbic crumbling wreck of a man. Strangely this was the most sympathetic Malvolio I think I have seen. There was something truly pathetic (in the genuine sense of the word) during the box tree scene-after the initial high jinks and frivolity, Malvolio says ‘I am happy’ in a tone of tearful disbelief as he wanders off attempting to smile. Sympathy was there for the old Puritan well before the restraint of the dark house which whilst intellectually pleasing, was not necessarily a huge success in theatrical terms. It left me confused- even the motive for revenge seemed slight as to be fair the three drunken sots were making a dreadful row. Maria was unfairly shot down in the cross fire, which sparked her annoyance but the joke seemed as if it played not on Malvolio’s egotism but rather on his fragility as a lonely old man –not a nice one, true, but not really a subject for emotional mockery.

Maybe after some fantastic theatre productions over the years I am turning into a reviewer for a broadsheet and becoming pompous and picky, however I felt this Twelfth Night needed more sweet and less bitter.

Beautiful to look at though.