You may think you know the plot of As You Like It. But according to director Maria Aitken you don’t. There is a puritanical English court resided over by the evil Duke Frederick. You may know that Rosaline, our heroine, and Orlando, our hero, escape separately to the Forest of Arden (where the usurped Duke Senior is also in residence). But what you might not know is that the Forest of Arden is in fact America. And these expatriates are pilgrims journeying over the sea. The melancholy Jacques gives his famous Ages of Man speech at Valley Forge. Rosalind, Celia, and Touchstone take up residence in the South after the Civil War. Rosalind in disguise and Orlando trade quips about love in the Wild West. And all is revealed and everyone married to the proper person in 1930s glamorous Hollywood. Aitken has set the production on a Hollywood sound stage, jumping through time and space in a valentine to America. 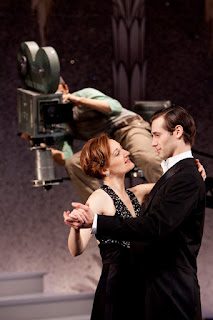 Francesca Faridany as Rosalind and John Behlmann as Orlando, in the Shakespeare Theatre Company’s production of William Shakespeare’s As You Like It, with David Joseph Regelmann in the background. Directed by Maria Aitken. Photo by Scott Suchman.
But the result is, if you pardon the term, a hot mess. There are about 17 productions of As You Like It crammed into this one night, which really plays havoc with the through line of the story. Pausing for someone to yell, “cut” and for an actor to walk across the stage with a boom mike breaks the flow of the action. Because you have to re-adjust nearly every time a character walks onstage, I found it difficult to judge the acting and characterization. Luckily there were no weak members of the cast.

But I can say that Miriam Silverman, who appears to be making a career of standing out in less than stellar productions of this play, is incredibly charming and watchable as Rosalind’s best friend and cousin, Celia. Silverman is possible more charming than actors in more important roles, which is a strength of the actress, and a weakness of the production.

I will admit to be prejudiced against strong concepts. But to be fair, they can win me over (see, for example, Ed Hall’s all male Merchant of Venice set in a prison). But when Shakespeare was originally written for no set and practically no technical elements, you have to have a really strong reason to put them everywhere. And Aitken’s reason for doing As You Like It with 180 costumes seems to be just because she can. (Poor Aubrey Deeker -- I think the costume department must have a contest to see who can put him in the most ridiculous outfit before he refuses to wear it. If you thought Shrew's leather pants and Ion's gold lamé were something, wait until you see his final getup in this production!) Aitken states in her notes that because this play is so well known she felt she could take some liberties with it.

And that’s reasoning that I have issues with. First of all, no matter what play you are doing, there are going to be people in the audience that have never seen it. And the play needs to make as much sense to them as it does to the people who are on their fiftieth viewing. Secondly, that reason suggests that the concept has little or nothing to do with the plot or meaning of the play itself. And indeed, as far as I could tell, this concept doesn’t do anything to illuminate the text.

The production certainly has its clever and imaginative moments. Anjali Bhimani's spitfire Phoebe works quite well when she is in the Wild West. There is a running gag with Andrew Long’s Jacques inhaling substances through different devices. Orlando and Rosalind hop in a car at one point, complete with traveling footage displayed on a screen behind them. But the production’s finer moments ultimately get buried by Aitken’s much ado.