Dead bodies, rape, strangulation, guns, knives, violence, violence, violence. So much so that it seems unnecessary. “What?” you ask, surprised. “You who worship at the alter of Martin McDonagh found violence in a play to be too much?” I did. At the Sidney Harman Hall the other night, while watching King Lear, I learned that sometimes making a play more gruesome doesn’t make it better or more touching. For blood and gruesomeness to work, it has to be the right play. I felt like I was watching King Lear directed as though it was Titus Andronicus.

Titus Andronicus is a revenge tragedy playing out on a political stage. King Lear is a domestic tragedy playing out on a political stage. So, sure, there are similarities, but I really don’t think you can direct them in the same way. Revenge tragedy is louder, more gruesome, more shocking. A tragedy like King Lear is quieter, more in the heart, in the relationships, and I think Robert Fall’s production loses sight of that at times.

But only at times. This is still a very smart production, with a lot of bold choices, which I appreciate. Some of the choices work for me, and some of them don’t. One aspect that works is the setting. Robert Falls has very set the play in a very specific place and time, namely Yugoslavia in the 1990s under the leadership Marshal Tito. I like modern dress Shakespeare, but I prefer it to be a generalized modern period. The danger of a very specific time and location is that director might bend the play to the setting, instead of the setting to the play. Falls successfully avoids that trap. The setting lends atmosphere and context to the play, but does not override it. 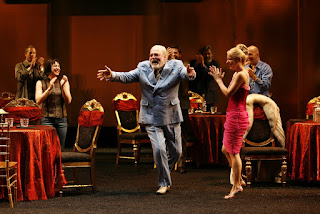 Kate Arrington is a fully realized Reagan, manipulative and spoiled, but also insecure, and under her older sister’s thumb. I’ve seen Reagans take great delight in the gouging of Gloucester, which I’ve loved. Arrington plays Reagan as completely shaken by her own deeds, and by her knowledge of what is coming next. This choice is also wonderful.

Best with the text is Jonno Roberts as the dashing Edmund. He relishes the language, as every good Edmund should. His Edmund is someone who notices the lessers, the people being crushed under others – he gives money to the toilet paper lady in the bathroom, whom the other men ignore. This adds texture to Edmund’s character. But this texture is confused by the omission of Edmund’s confession at the end of the play. I understand what Falls is trying to do. He’s demonstrating the terribleness of human nature, the capacity of all of us to descend into something beastly (an arc completed most successfully by Kim Martin-Cotton’s Goneril). He’s purposely removing all sense of redemption from the play. I’m just not sure it works.

There’s a lot of choices that completely baffle. I can accept Oswald (Dietrich Gray) as a blinged, DJing dude with a skateboard, but a fruity, pink-panted Edgar (Joaquin Torres) I cannot. His transition into Poor Tom is already textually extremely difficult; this makes it impossible. In the middle of the play Gloucester, Lear, Edgar, and Kent all walk to the back of the stage and then turn around and then do a dance that seems to be some sort of interpretive representation of madness. Huh? Finally the last lines of the play (given to Edgar instead of Albany) are inexplicably and inexcusably spoken into a microphone that has appeared out of nowhere, and for only this purpose.

Like I said, there is a lot happening in this production. A lot good, a lot not good, and a lot that really makes me think about the text and the performance. And for that, it’s certainly a night at the theatre well spent.

And gosh darnnit, Rudesby! I really want to see a production that you and I disagree vehemently on. I wonder if that will ever happen. Well, we’ll see what somethingwicked makes of this striking production of King Lear once she sees it.