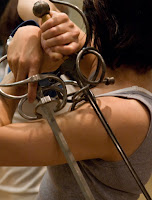 Girls with swords.
All speaking Shakespeare.

Both productions are directed with a strong sense of ensemble: actors pop up in multiple roles, and the choruses are shared. Both have taller Juliets and shorter Romeos. Neither makes much to do about the gender casting; each just presents the play. Both have sets that lend themselves to lots of physicality – jumping, climbing, pulling. And both have a couple of remarkable performances.

David Muse gets a lot right with his production at the Shakespeare Theatre. The most important element, in my view, of any production of Romeo and Juliet is the pacing. It has to move at break neck speed towards its conclusion. Romeo and Juliet have to make their decisions so fast that there is no time for us in the audience to realize that they are doing some rather stupid things. This seems rather obvious, but I’ve seen many productions that forget this element and so ultimately fail. But Muse’s production is energetic, with passionate characters running on high octane.

The fights are well done (fight direction by Robin McFarquhar). Romeo and Tybalt’s fight is arguably too long, but it is saved by the stunning and bold way in which Romeo kills Tybalt. Instead of running him through with his rapier in the heat of battle, Romeo drowns Tybalt in a nearby bucket of water. Wow, this works so well. It gives great insight into the emotional state of Romeo and immediately changes the tone of the play which is exactly what this moment is supposed to do. Well done.

As is par for the course at the Shakespeare Theatre, the supporting cast is strong: Aubrey Deeker and Cody Nickell are every bit as kick ass as I expected them to be as Mercutio and Tybalt. Deeker is extremely physical, running and swinging around the stage. He jumps on boxes, does pull ups, anything to let out the never ending energy abounding in Mercutio. Nickell is dangerous and tightly wound, fuming in the corners.

Ted van Griethuysen is the best Friar Lawrence, maybe ever. He gives certainly the most well motivated rendition of the character I have ever seen. Everything he does makes sense. If you cry at this production it is more likely to be at his reaction to the deaths of Romeo and Juliet than to the deaths themselves.

Finn Wittrock is an excellent Romeo. I would argue that this is in fact the hardest role in the play, because, frankly, it’s so easy to be annoying. Romeo is such a male ingénue, and he spends a lot of time whining and sighing and throwing himself on the ground. It can get old. But Wittrock manages to be endearing and “aww” inducing, capturing that sense of youthful impetuousness.

James Davis doesn’t quite work for me as Juliet. He makes a lot of interesting choices, he captures the strength of Juliet, and has a nice sense of the awkwardness of youth, but there is no girlishness in his characterization.

And this is the crux. The gimmick of the production is actually the least successful part of it. Tom Beckett and Jeffrey Kuhn are slightly too affected as Lady Capulet and Lady Montague, Beckett in particular is too self-conscious about the pitching of his voice. There are a lot of good things happening, but none of them have anything to do with the fact that it is an all male cast. It doesn’t actually add anything to the production. Muse could have directed the same production and used actress and it would have felt the same, and honestly, probably would have been a stronger production.

The only other major artistic quibble I have is somewhat related. Muse has stated that the all male production came about because of a growing interest he has in original practices. So the production is all male, everyone is in Elizabethan type garb, there is music and song, the stage is set in thrust configuration, but the characters don’t talk to the audience. The thrust configuration changes the vastness of Sidney Harman Hall into a much more intimate theatre. The stage is near to the ground, and the first row of the audience is two feet away. I wish Muse had chosen to use this fact in the staging of his production.

In Taffety Punk’s production, the setting is an implied playground. There is a swing (somewhat under used), and lots of pipes forming two ladders and pull up bars. This setting doesn’t always work, Juliet is slightly obstructed in the balcony scene, but what it does do is lend a sense of play to the entire affair. It also highlights the youth with which Bruneau and her actors have chosen portray the characters. This element is the most successful choice of the production. Benvolio (Esther Williamson), Mercutio (Kimberly Gilbert), and Romeo (Rahaleh Nassri) truly seem like young teenagers, doing all the crazy things that kids do.

Gilbert plays Mercutio like a young street punk, just wantin’ to hang out, man. Her Mercutio is all about the fun and the chillin’, and doesn’t understand why Romeo is changing and deserting his old ways once he falls in love. Gilbert is also fantastic in Mercutio’s death scene; there was this clear sense of the youthful shock at discovering one is not invincible.

And Nassri – wow. All I can say is I’ve seen two brilliant Romeos in one week! Nassri is wholly convincing in her characterization. She has excellent timing. She gets it all right – his youthful impatience, the rolling of the eyes at authority, the fact that everything that happens is of great dramatic import when you are that age.

The characters’ actions make sense, and Williamson, Gilbert and Nassri are also successful in making their characters immediately identifiable in a modern context.

The two actors on the young side of the play who do not succeed at this are Abby Wood as Tybalt and Kelsey Rae Grouge as Juliet. Wood doesn’t create a Tybalt that fits into the world of the play, and as a result makes little impression. She also had no reaction that I could notice to the news that she killed Mercutio.

Grouge states in her bio that she always thought she was too tall to play Juliet. Well, she is. But James Davis, just as tall, is not. The difference is in how they carry themselves in the role. Davis is not afraid of his height, he knows how to take the stage, and moves with elegance. Grouge seems all too aware of her own height, and is compressed into herself the entire performance. Her vocal support is also nonexistent, so her voice is completely in her head and nose. The result is she lacks the deep-seated passion and drive of Juliet.

There is nice work in the supporting cast from Tonya Beckman Ross and Erin Sloan as Lord and Lady Capulet, and from Michelle Shupe, who is a convincing and solid Friar Lawrence.

So who wins when it comes to boys vs. girls? Answer: the audience does. Neither production was better or worse due to the gender, nor was the male production was better at the male roles and the female production better at the female roles. What we learn from such a theatrical experiment is that gender and budget don’t matter when it comes to talented actors. If you can, see both productions, because these are two Romeos and two Mercutios that are not to be missed.

Anonymous said…
juliet performed with strep throat and a fever of 102 that weekend.